Mount Pilchuck is a very popular trail here in the NW, approximately two hours from Seattle[1].

While I was hiking, I was thinking about how I would describe Pilchuck to someone who isn't familiar with it. This is what I came up with:

It's also a beautiful hike, and the topography of the mountain is very rugged, and unique, and the views at the top are spectacular. One of it's advantages is that there's an unobstructed west-facing view of Puget Sound, which is rare in the Cascades, and so you can see Whidbey Island, Everett[3], Lake Stevens, etc.

Check out this annotated photo I took from near the summit. I recommend clicking that image for the larger version (so the text will be clearer). 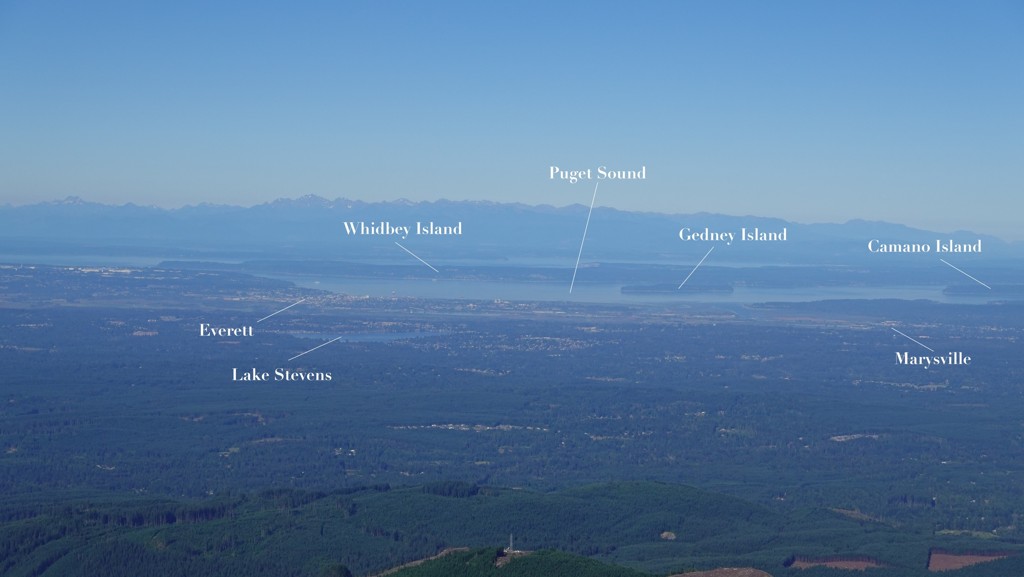 The entire trail was snow-free all the way to the summit, which made getting to the fire lookout very straightforward. Here is my uneventful ascent and descent, as well as my ascent map, courtesy of Garmin: 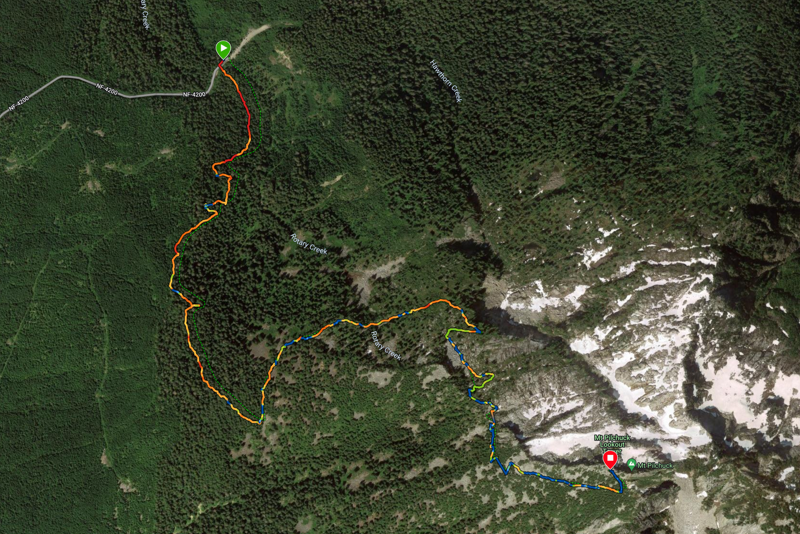 A Quick Aside About Hiking This One In Winter

This hike does transform into something dangerous when the mountain is covered in snow, and it's fairly easy to get lost and wander off-trail (ask me how I know). I recommend summiting this one when the trail is clear, and then using GPS if you hike it when the trail is under snow.

Here's an excerpt from the WTA description of the hike:

There are perilous elements, especially in winter, when snow may obscure the path, leading hikers to improvise and become lost. Hikers often have to be rescued from the mountain, so please take all the necessary precautions before tackling the trail.

Apparerently, Snohomish County Volunteer Search and Rescue (aka: SCVSAR) pulls a handful of people off of Pilchuck each year, so casual hikers should probably stick to the summer hiking season.

I definitely picked the best day this week upon which to hike (the rest of the week it's expected cloudy). I've been trying to thread the hiking needle this summer, which involves working around the following constraints:

That, my friends, is a wickedly compressed hiking season. Six weeks of prime conditions, then it'll be up to chance and luck. 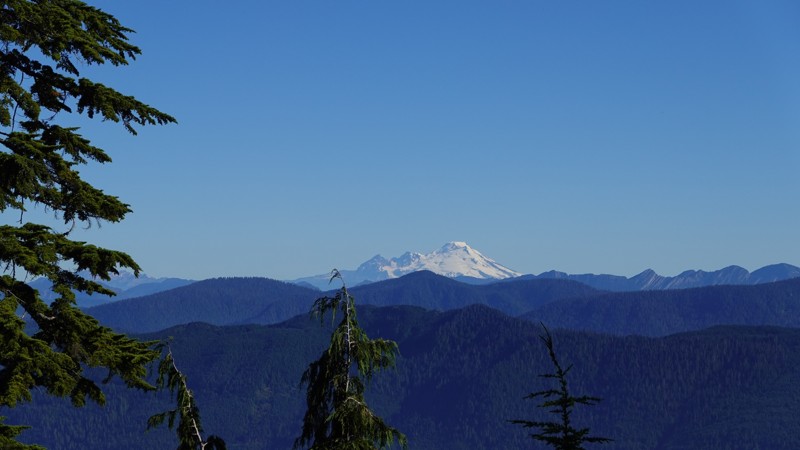 Nice peek at Mt Baker during the initial mile of the hike. 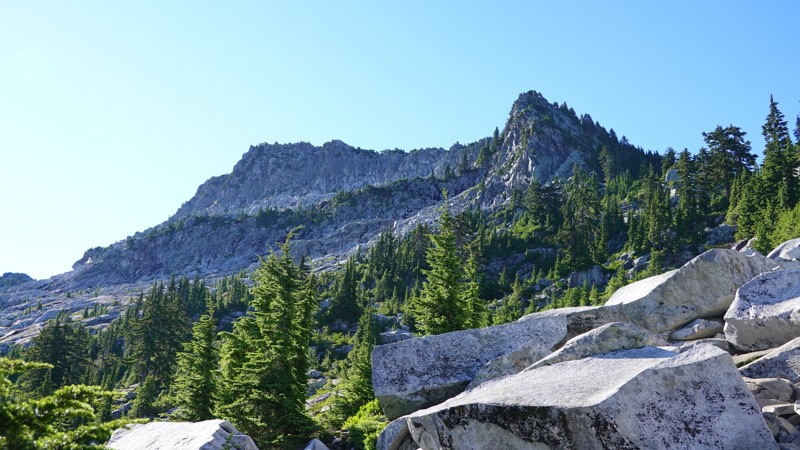 The peak of Mount Pilchuck is very cool. It's rocky, barren, and slightly hostile. 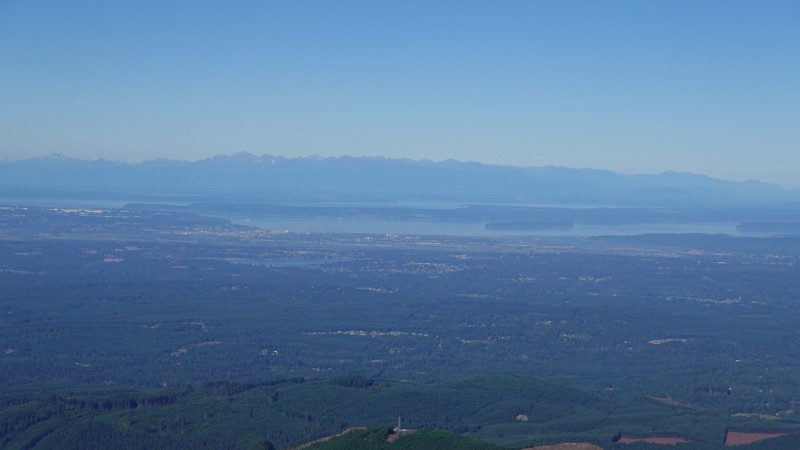 Puget Sound from the upper section of the trail. Pilchuck is on the west edge of the Cascades, allowing for an unobstructed view. 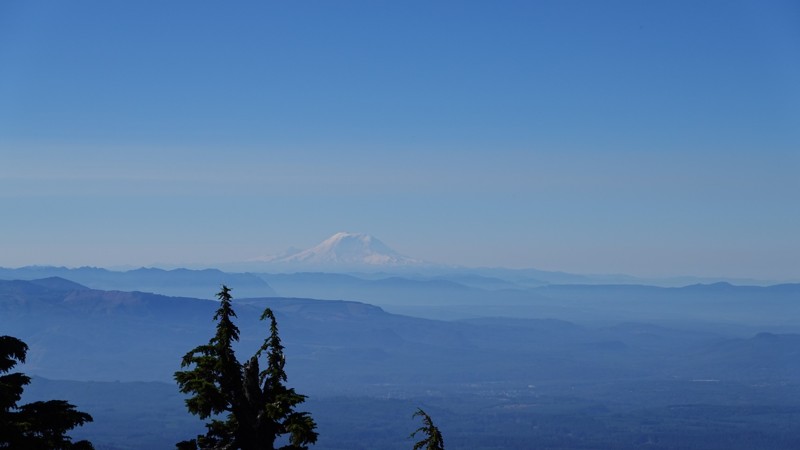 Beautiful photo of Mt Rainier. I believe Rainier is about 85 miles away. 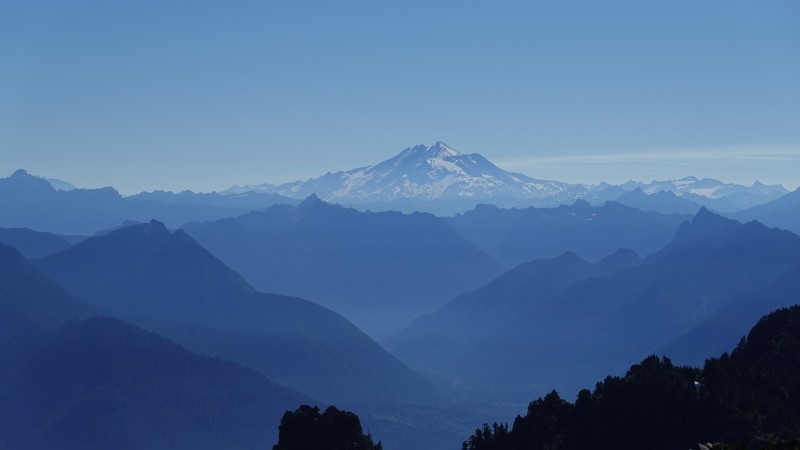 Also a beautiful photo: Glacier Peak, as seen from the summit. 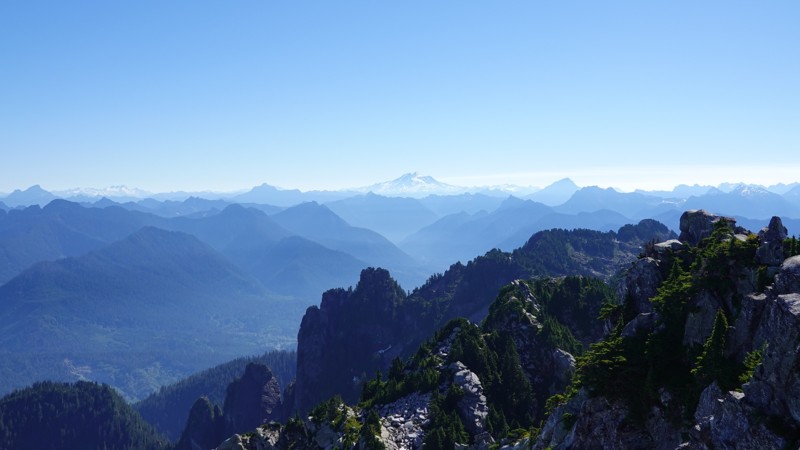 You can see the east ridge of Pilchuck (on the right), and the mountains as you look east. 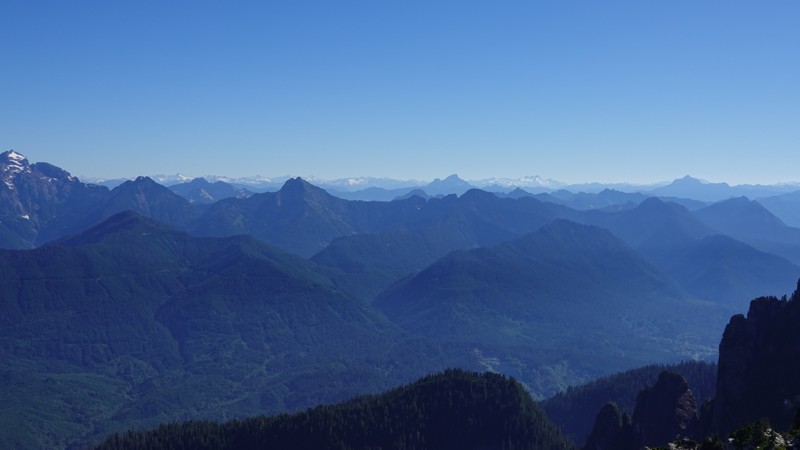 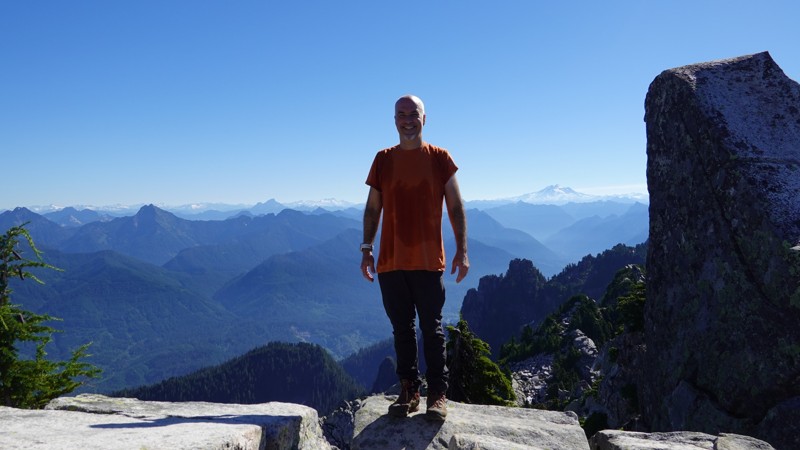 Selfie, standing at the edge of a 500' drop into the rocky valley behind me. 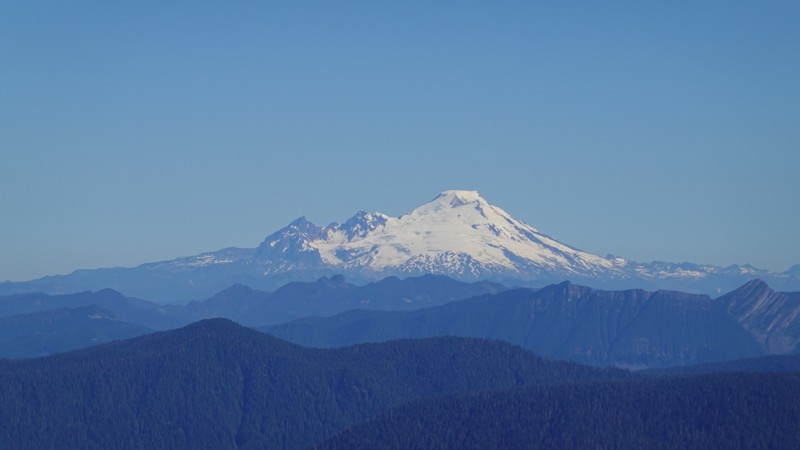 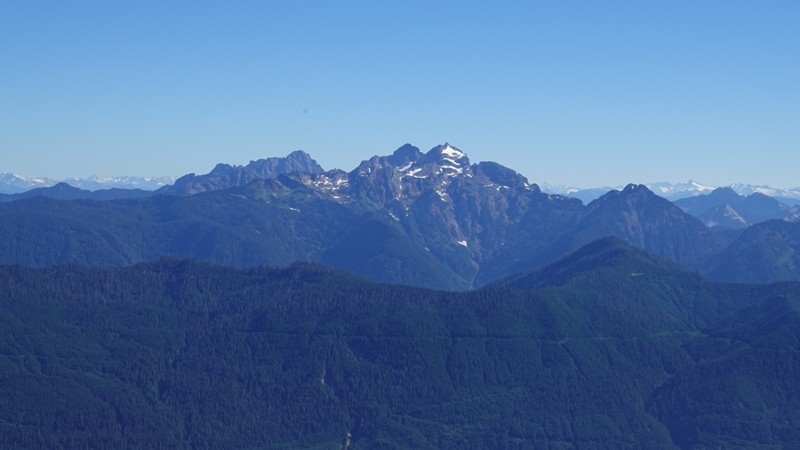 Three Fingers [center right], Whitehorse [to the left], Big Bear and Eldorado [to the right]. 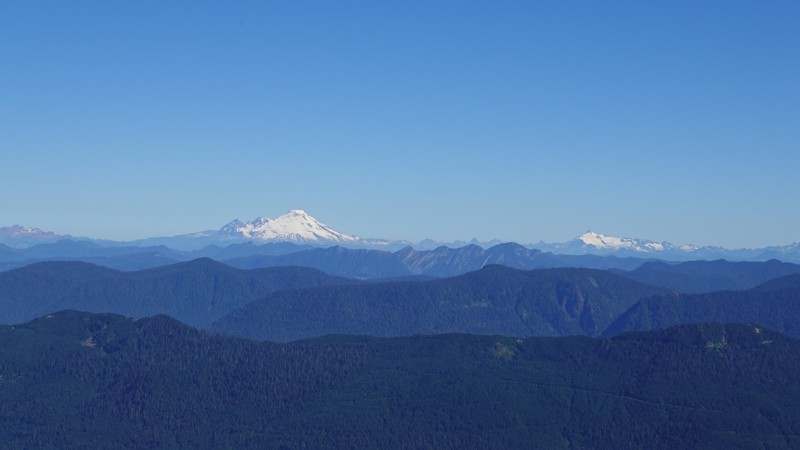 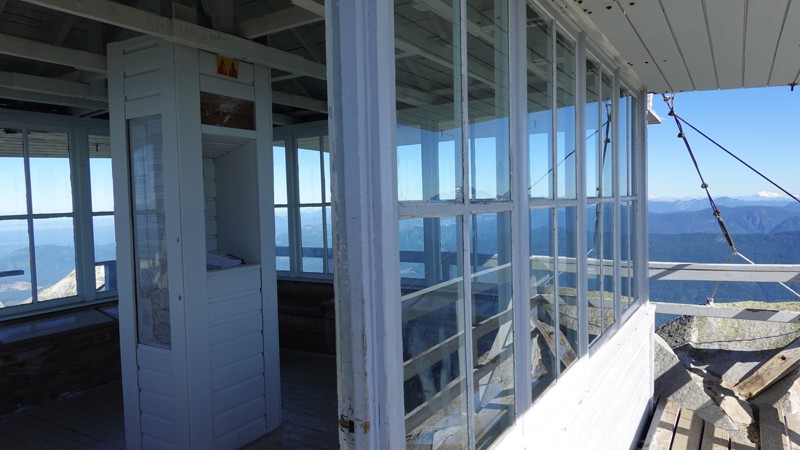 The fire lookout is looking pretty good. I had the place to myself for over an hour. 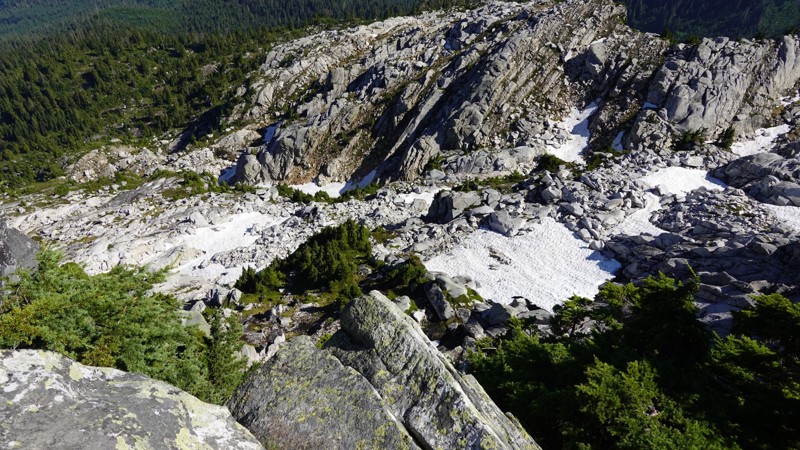 This is the rocky valley on the east side of the mountain. It's quite a drop. 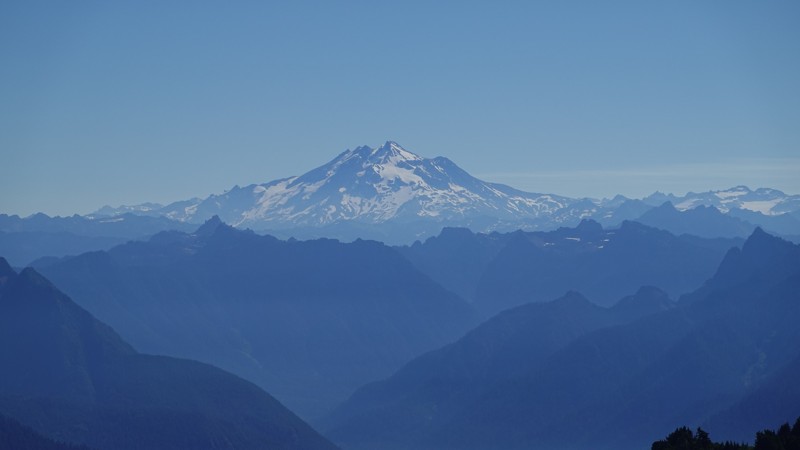 Such a beautiful shot. There's an 88 mile hike *around* Glacier Peak, and the hike to summit Glacier Peak is ~32 miles. 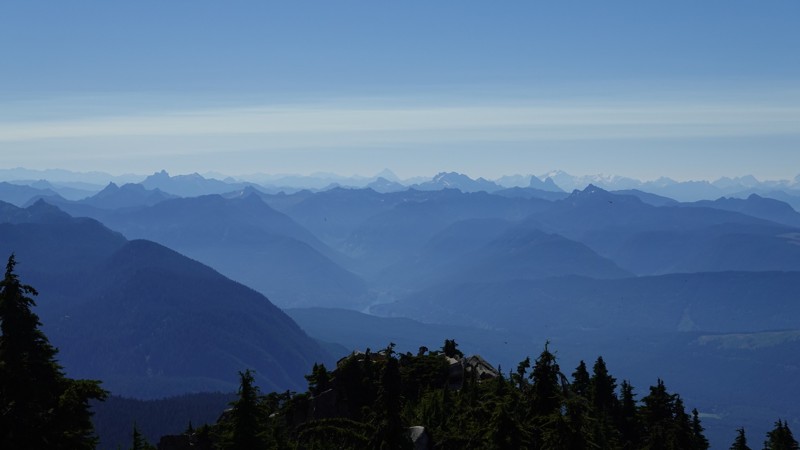 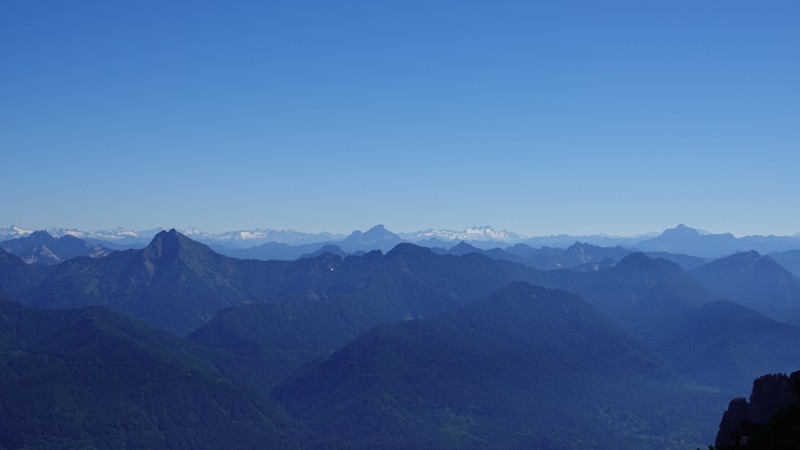 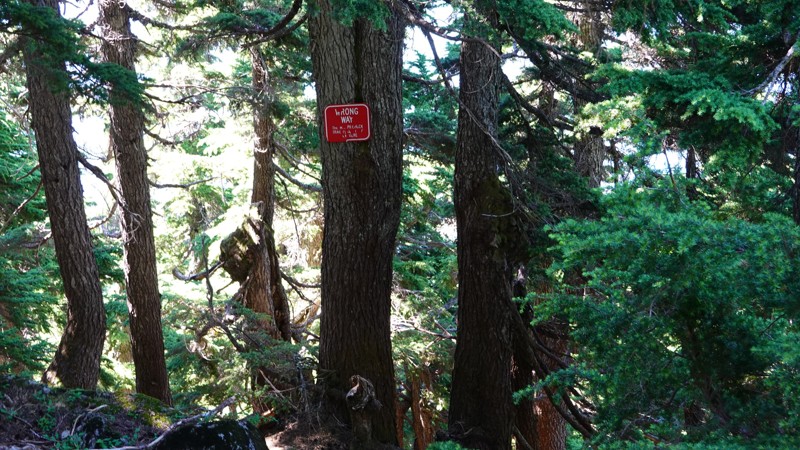 There are a number of warning signs along the way, trying to keep people from going off-trail, down the south slope of the mountain. 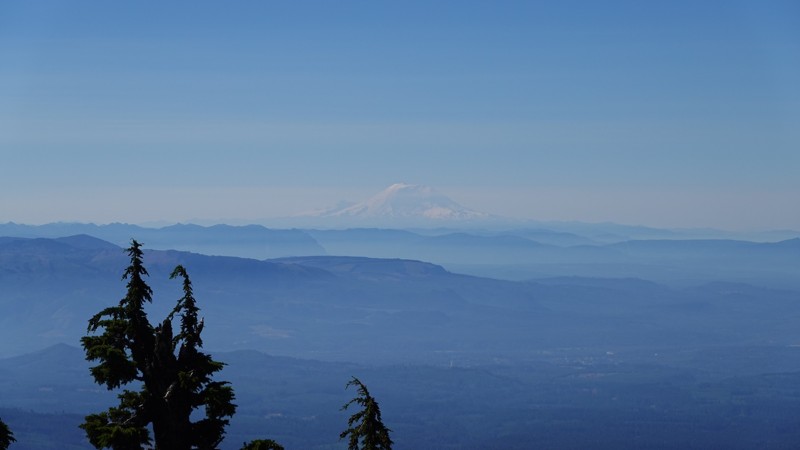 Another beautiful shot of Rainier on the way down.

This is the boulder field I made my way up (~1/2 mile), last year, to try to re-find the trail when I was lost. 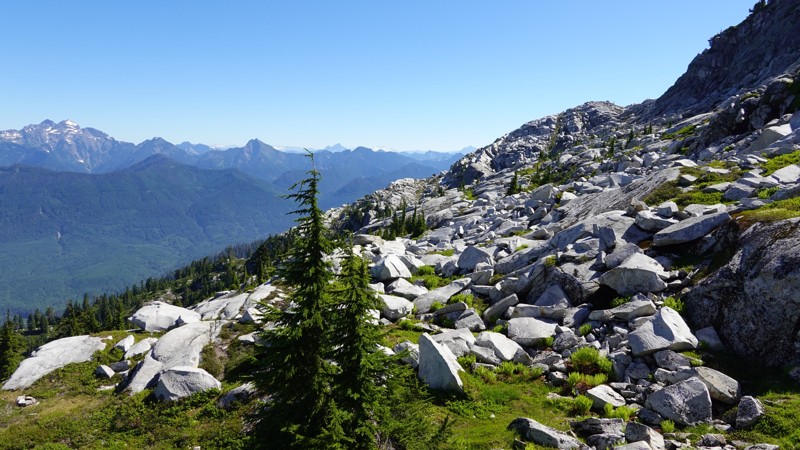 Great shot of the mid-section of the mountain, where it begins to transition to all tumble-down boulders.
Footnotes:
[1] It would be ~90 minutes, only the access road is literally the shittiest access road in the world and it takes ~40 minutes to drive 6.8 miles. My Highlander felt like it was being tossed around like a rag doll.
[2] You know the one: where the person raises both of their hands in front of them with just the index and middle fingers pointed straight up and then, as they say the word they intend to be in quotes, they flex both sets of fingers downwards as they say the word.
[3] Generally something that [literally] no one else would ever offer up. "Hey guys! I can see Everett!!"*