During Which I Learned Something Pretty Important About My Own Limitations

I started out early, walking on the road towards Monte Cristo at 6:40am. I knew it was going to be very hot later in the day, and so the idea was to get to the summit of Del Campo by 11am, or thereabouts, so I could be back at Foggy Lake by noon or 12:30 for an early afternoon descent.

Hiking Gothic Basin/Foggy Lake/Del Campo Peak has a big advantage over hikes like Mt Pugh: there are multiple sources of water at decently regular intervals all along the way. The temperature was expected to reach the 90s, so having water sources was imperative.

For those of you who are unfamiliar with this area, the hike has three destinations along the way: Gothic Basin → Foggy Lake → Del Campo.

Here are the relevant stats so you can get an idea of the distance and elevation involved:

I got to Gothic Basin at 9am and took a short break, most of which was spent refilling my water bottles. For those of you who like math: that's 2.5 hours (of clock time) for a little over 4 miles and 2,840' of elevation gain, which is a pretty good clip.

I set out for Foggy Lake at 9:25 and made it to the lake twenty minutes later. There's a lot of snow up there for late July (Foggy Lake itself is still completely covered by snow). I have to admit that, from aesthetic point of view, I like it better either (a) completely covered in light snow or (b) completely exposed.

From there I began my ascent to Del Campo. As I gained elevation, I kept seeing sources of water everywhere. This was very comforting to me. There's so much snow still on that mountain, and it's melting, so there were a handful of streams along the way, even near the peak.

The path to Del Campo is straightforward, save for the huge snowfield that's right at the base of the crags. I hiked up (west) and around/above it, so I never had to walk on it (I didn't have the right gear anyways, so that wasn't going to happen anyways).

Before we get too far, please familiarize yourself with the definition of the word crag, as it's highly germane here:

crag (noun): [1] a steep or rugged cliff or rock face. [2] a high, rough mass of rock that sticks out from the land around it.

The very top of Del Campo consists of a bunch of crags, which you have to scramble up in order to summit. It's a short scramble, it takes maybe 20 minutes to summit once you reach the base of the crags, but it's also incredibly dangerous.

Here is my ascent and descent. The descent is a little shorter because I paused my Garmin a couple of times to take a break and then hiked for a bit before I remembered to start it back up.

Note: According to my Garmin, the temperature reached 99° during my descent, so it's probably good that I was tuned into both water supply and temperature.

And here's my ascent map, courtesy of Garmin: 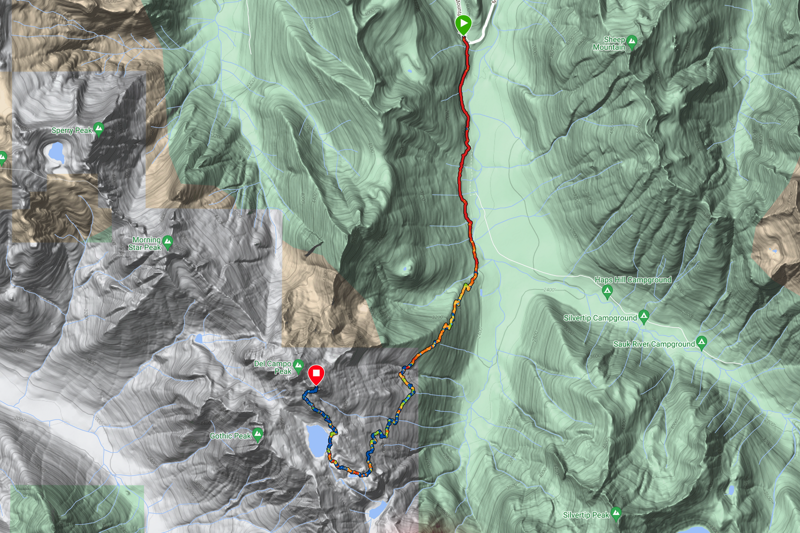 A Little About Del Campo

Here's a nice, succinct description of the scramble section:

The first rock bit is very steep with class 4 moves. If you take your time can find a ledge system up. The upper section of the climb had a few challenging moves. The summit provided views of all the volcanoes and North Cascades. A challenging, beautiful scramble.

And from the description of this hike from wta.org:

If you still have energy left after reaching Gothic Basin, search for a light boot trail up towards Del Campo Peak. The trail leads to the base of the talus. This is a great stopping point for those who prefer to hike rather than climb or scramble. The views here are great, one can see the whole basin, a birds eye of Foggy Lake and on a clear day like today all the way to Mt. Rainier.

Should you decide to tackle the summit, know that it is incredibly steep, and a fatal fall is never more than a misstep away. If you're experienced and well-equipped, your reward is breathtaking views of Seattle, Everett, Rainier, Baker, Glacier Peak and everything in between.

I went all the way up the talus to the base of the crags, right near the summit (I was 600' below the summit.)

When I got to the boulder field beneath the crags, much to my surprise, I saw another hiker. I asked him if he was ascending or descending and he told me it was the former, and that he had been looking for the scramble route "for about two hours".

I asked if we could pair up for a while, as we were in the dangerous section of the hike and there's safety in numbers. He said yes, and so we began to look for the scramble route together. He was too far west, so I led him to along the base of the crags east to find the beginning of the summit scramble path.

I've read several descriptions of where to find the scramble route, and of course I summited Del Campo two years ago. The description nearly always sounds like (looks like?) this:

Aim between the main and SE summits, but don't go all the way up the steep loose gully between them or you'll end up at a vertical wall. Instead head left before things get too steep and find the cairned bootpath. It requires scrambling in places and has some exposure, which can be significant if you get off route at all.

I'm pretty sure I found the proper gully (there are photos of it below), and I may have even found the scramble path (I started my scramble at the "head left" part).

However, I started to have a number of misgivings at this point. Last time I summited, I posted a photo with a rather prophetic quote:

This is Aven. Her & Koal helped me summit (I would not have summit-ted without them).

This turned out to be true. After about 30 minutes of exploring and route-finding, and even though I was hanging onto the side of one of the crags, I made the decision not to try to summit. I had a handful of concerns, among them:

So I did learn something about myself this time: there are "hikes" I won't do alone. Del Campo is the very first one. My next task is to find someone to scramble up this one with me (someone with a lot more experience). It's guaranteed that I'll try again.

(I have no idea if the hiker I met was able to summit.)

Despite not reaching the summit, I did get a lot of beautiful photos. There was decent visibility (I could see Mt Rainier, though it was through misty air). The views of Mt Pugh, Sloan Peak, Silvertip Peak, Gothic Peak, and the surrounding mountains were lovely.

Being at the summit base after noon had it's advantages: the sun was at it's highest, so the photos from that time came out better than the ones I took while the sun was rising. 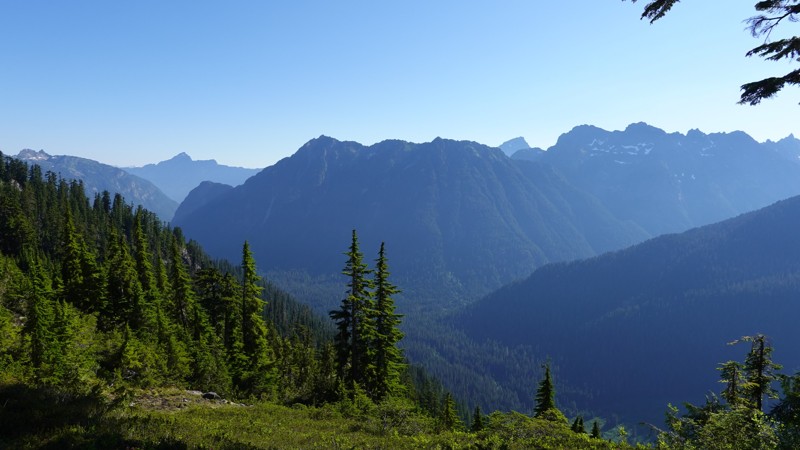 Early morning on the ascent. Pretty sure that's Sheep Mountain. 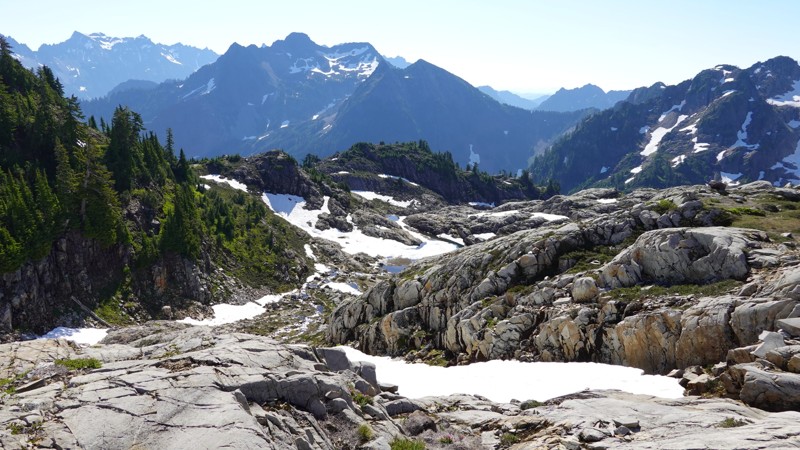 Looking south as I first entered Gothic Basin. There's a surprising amount of snow up there. 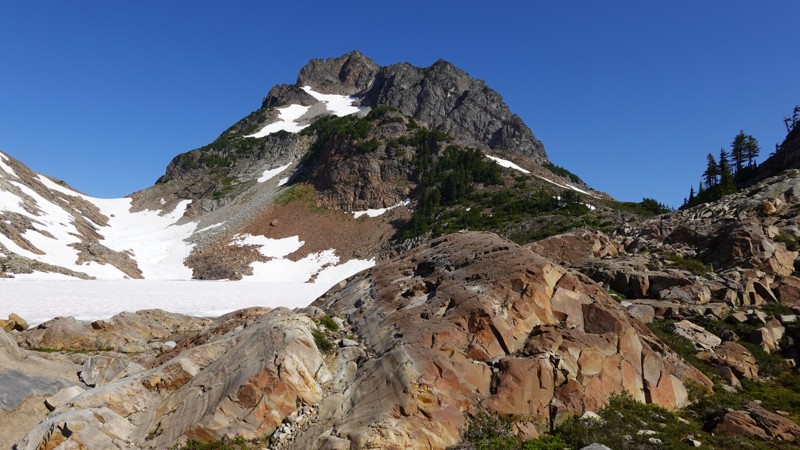 My intended destination, as seen from lower Foggy Lake. 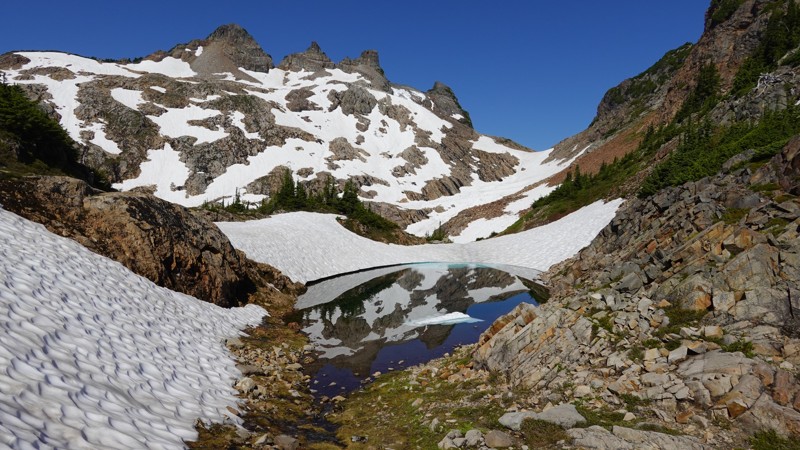 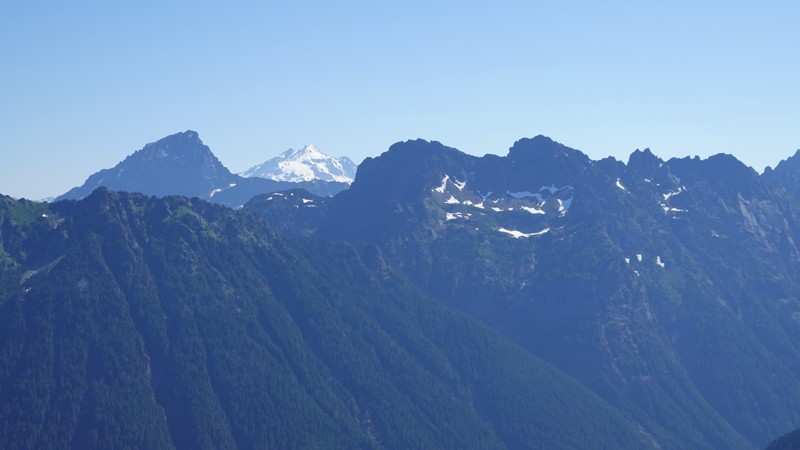 Mt Pugh on the left. Not sure what the snowy peak is: possibly Eldorado. 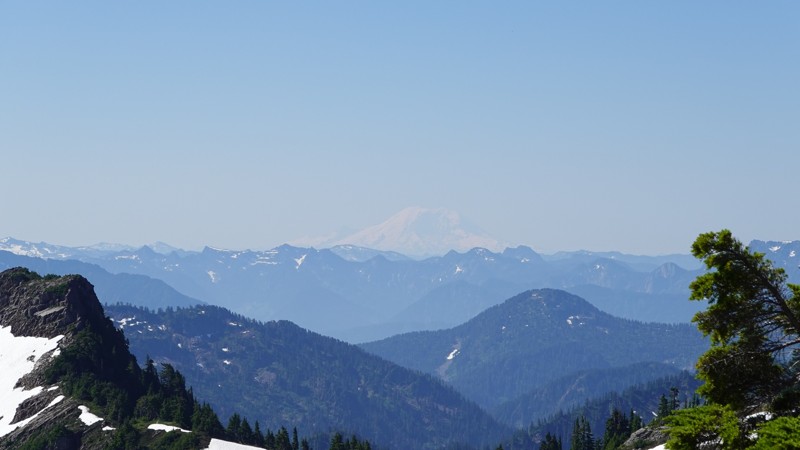 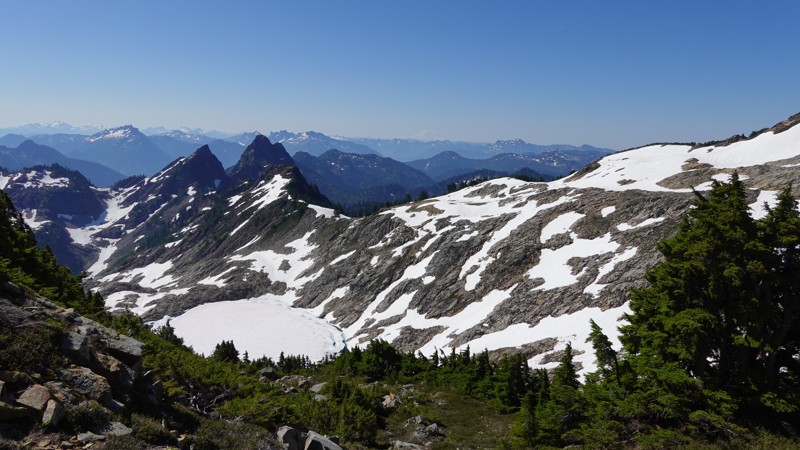 Foggy Lake is at the bottom of this photo. Awesome south view. 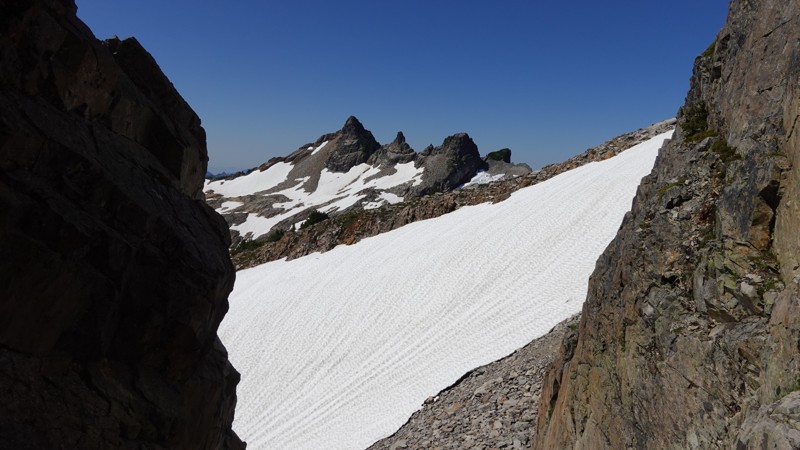 The glacier at the base of the Del Campo grags, as seen from with the "steep loose gully". 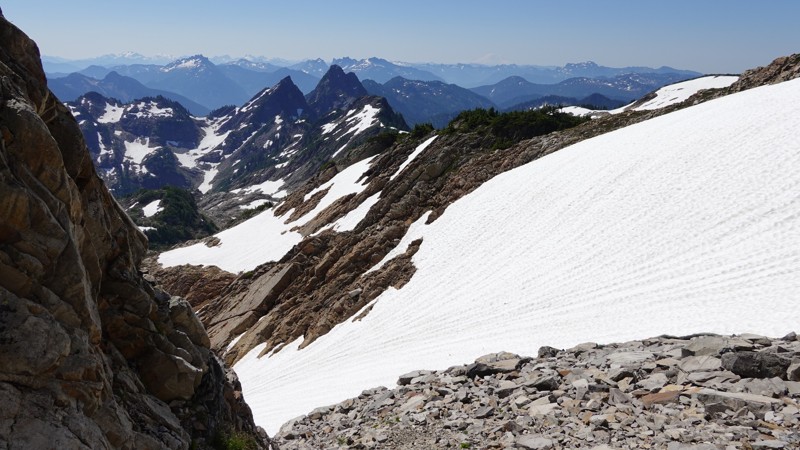 As you can see, this snowfield is massive and extends far down the steep slope (it's unstable too!). 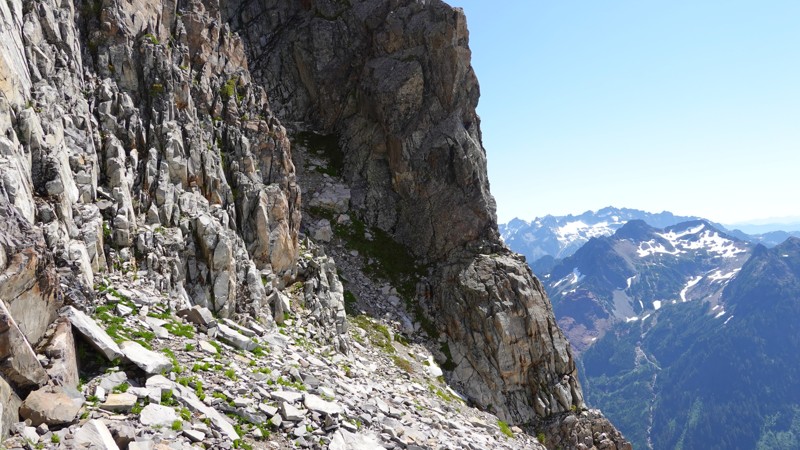 Del Campo is unique in it's steepness. That's looking into the "steep loose gully", where the scramble path begins. 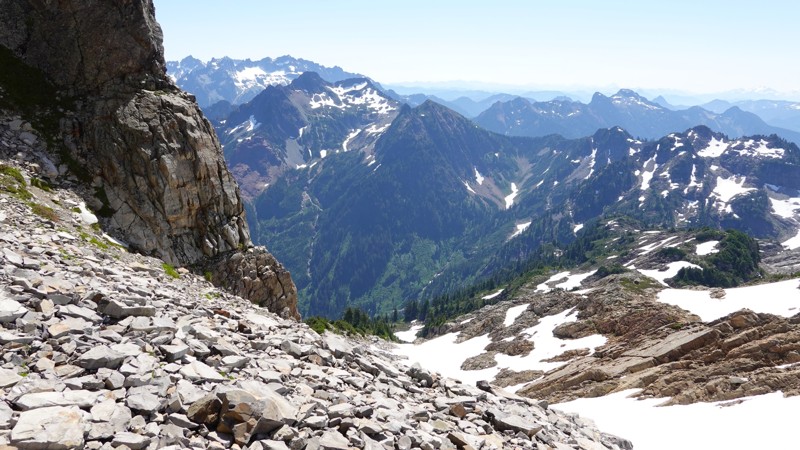 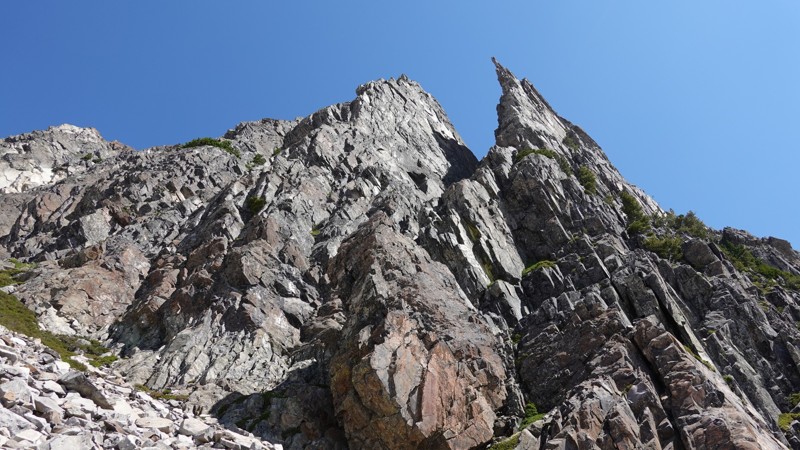 Looking directly up at the top of the crags.
Insane. I am 600' below the summit. 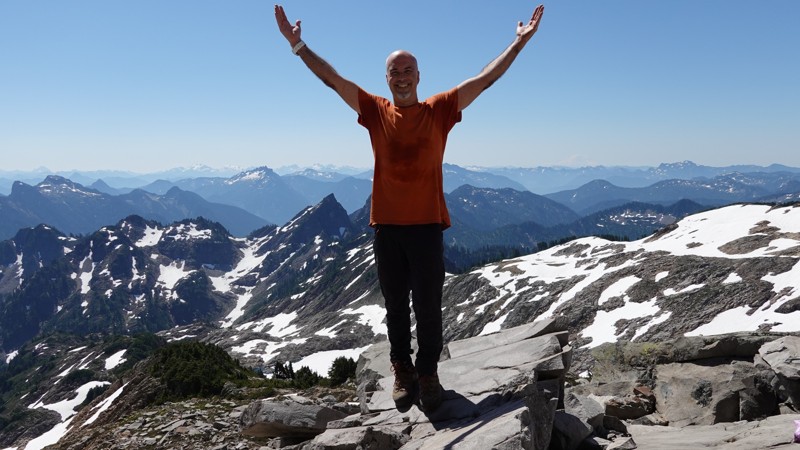 I was happy to have gotten as far as I had (and to have found a stable rock upon which to take a photo). 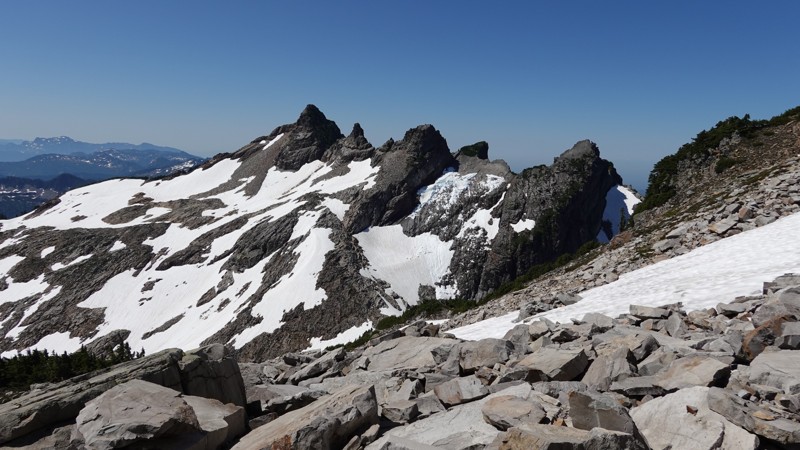 Gothic Peak from above. 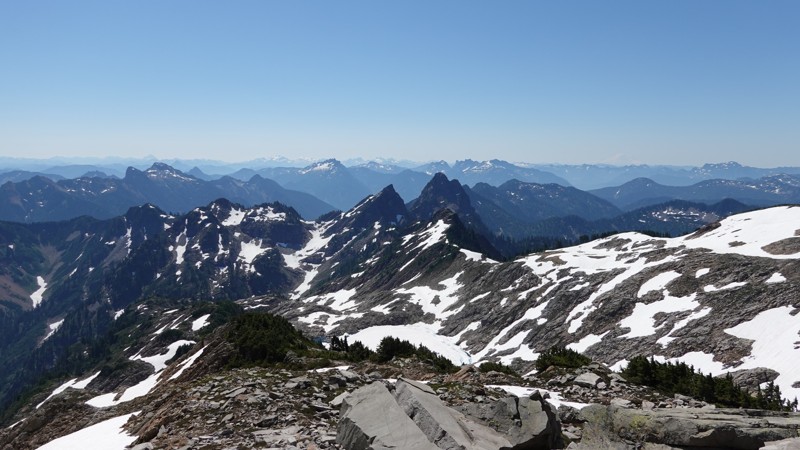 I will never get tired of the south-facing mountain view. 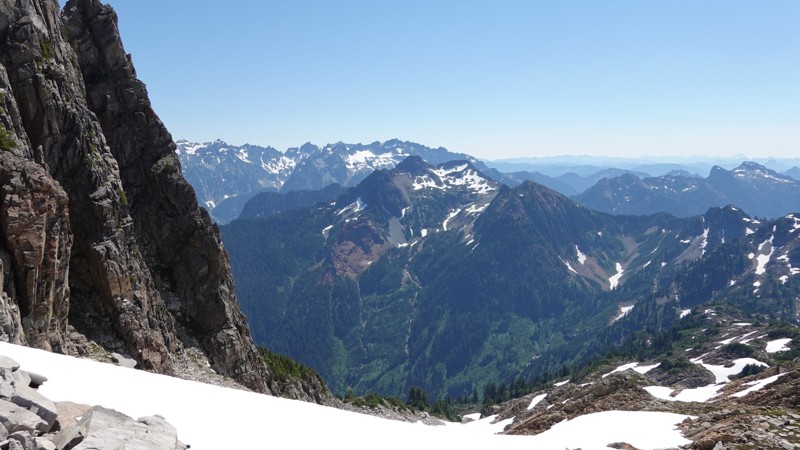 Looking down on what I believe is Silvertip Peak. 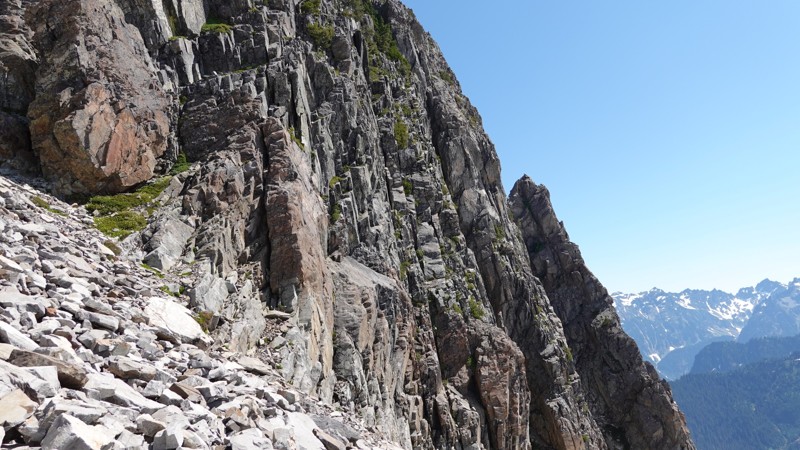 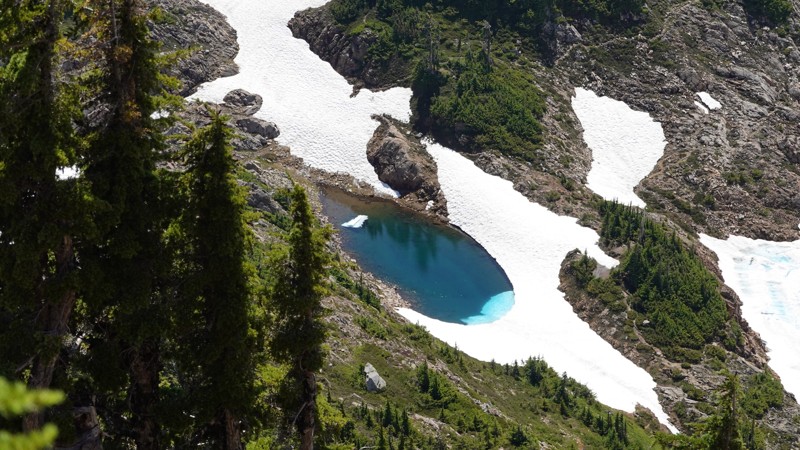 Little Foggy Lake, as seen from above. 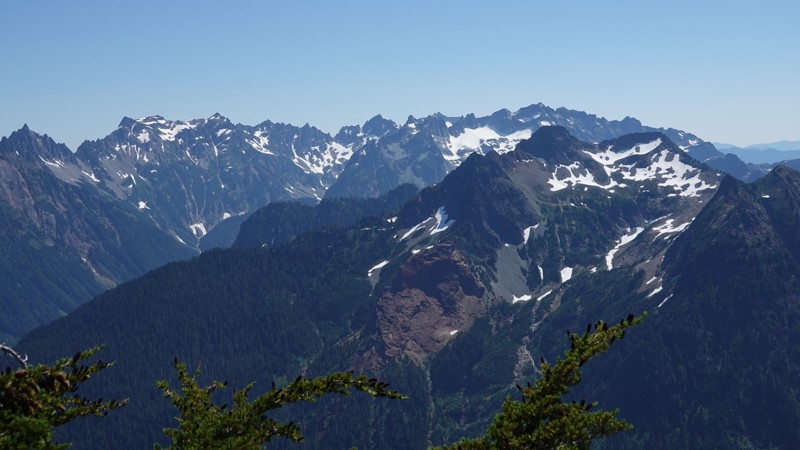 Much better color on Silvetip, which is an incredibly photogenic mountain (it has cool textures on it's slopes). 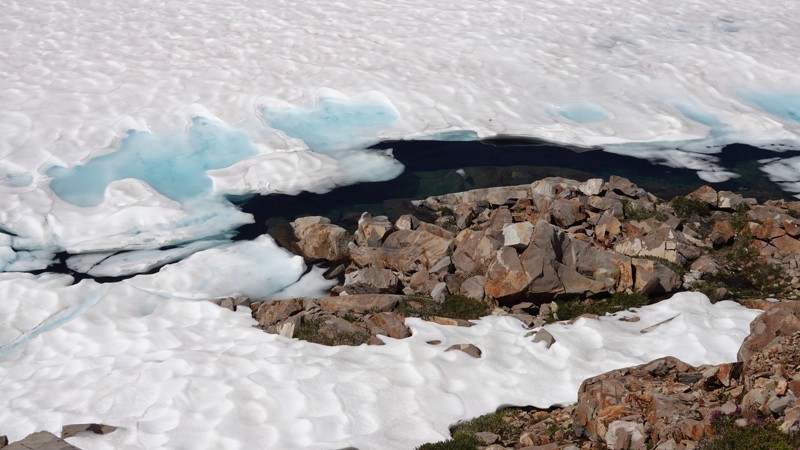 The shoreline of Foggy Lake. You can see that blue ring coming through as the snow melts. 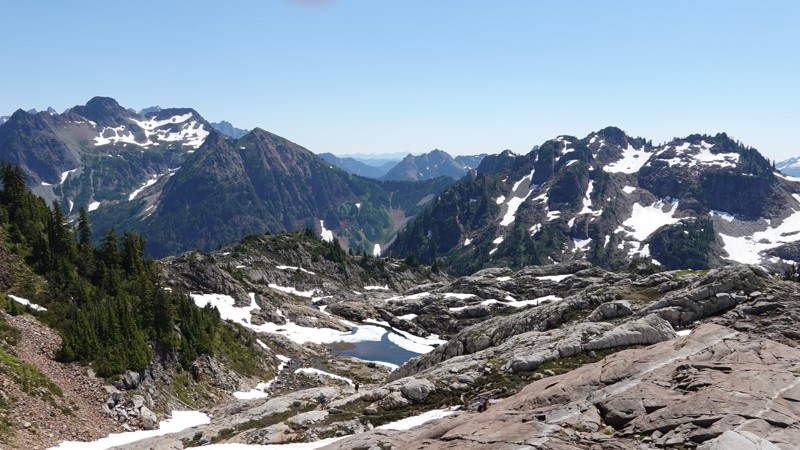 Looking southeast over Gothic Lake, which is half-covered in snow. 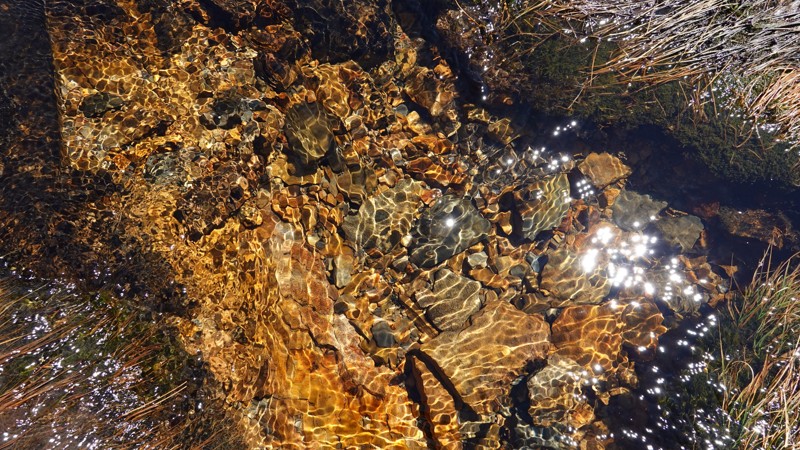 The stream connecting the upper basin with Gothic Lake always has such beautiful colors. 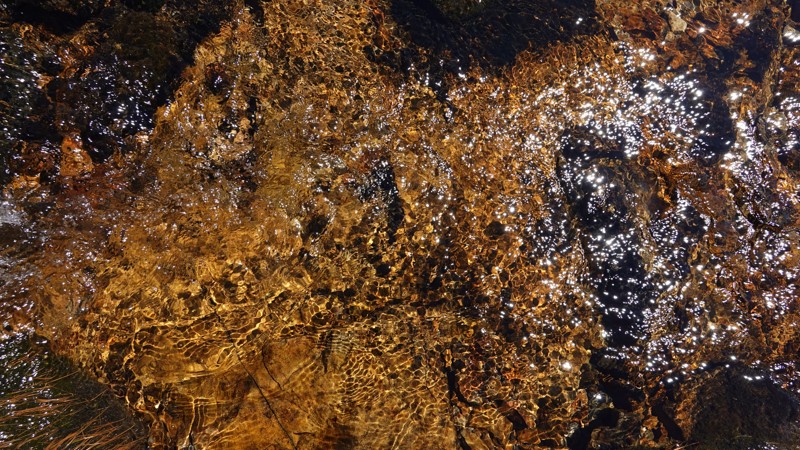 The stream is mesmerizing, how the sun reflected off of the surface. 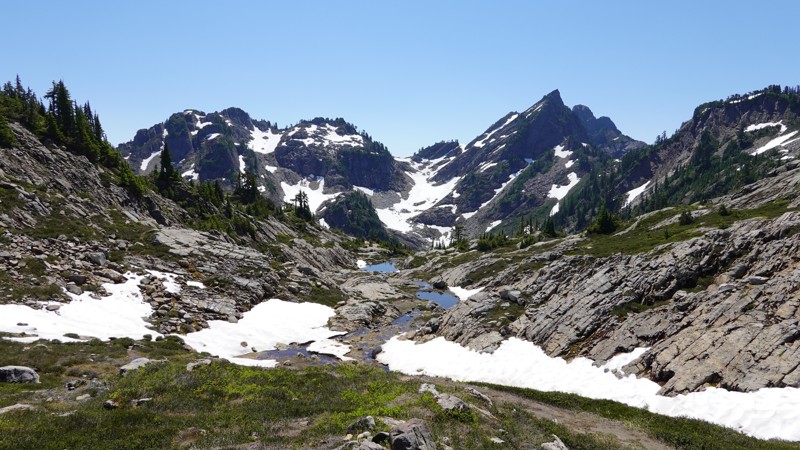 Last gasp of Gothic Basin: until we meet again. 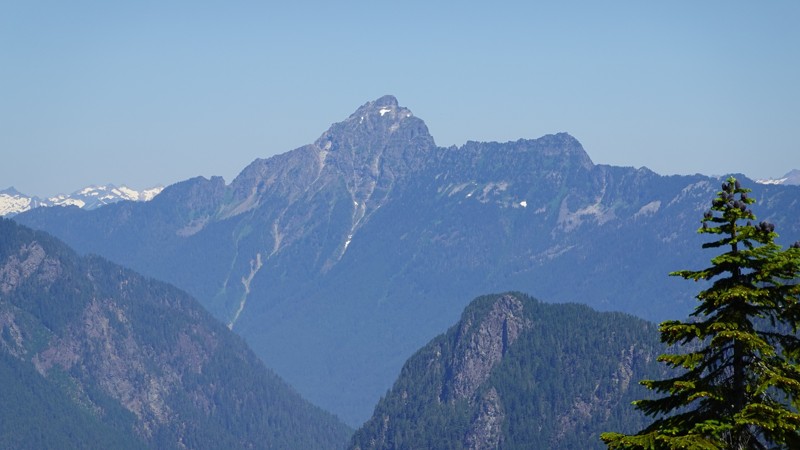 One my favorite mountains in the Cacades: Mt Pugh. 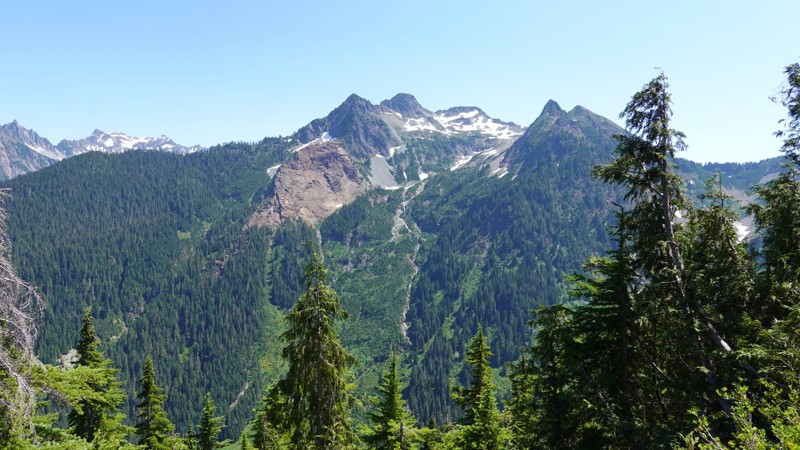 Mr Photogenic: Silvertip Peak. Lots of streams, lots of cool textures.
Footnotes:
[1] I swear my summit of Mt Pugh from a week ago made this one a lot harder. The last time I hiked to Gothic Basin I found it to be easy, and when I entered the actual basin, I just kept right on hiking, interestingly enough, all the way to Del Campo.

Not this time. I was pretty wiped out as I entered the basin and took an actual sit-down / take-off-your-pack / relax type break, which I hardly ever do.
&ndsp