Before it's too late, I wanted to publish a set of my favorite photos from 2021. As you might have guessed, they fall into only three categories:

They're mostly in descending order by date, and I'll endeavor to say why I think each photo is special. As a head's up: they'll obviously be photos of Mt Pilchuck, Mt Dickerman, Mt Pugh, and Del Campo, as these were the "big four" for me this past year.

The kids and I went to Hyak in December to go sledding, and we got there early enough that it was just the three of us. After a few separate runs, the kids started sledding together, and I just love the look on Alina's face, and the fact that she's trying to steer the sled. Unfortunately, I couldn't get a photo that had both faces in it. 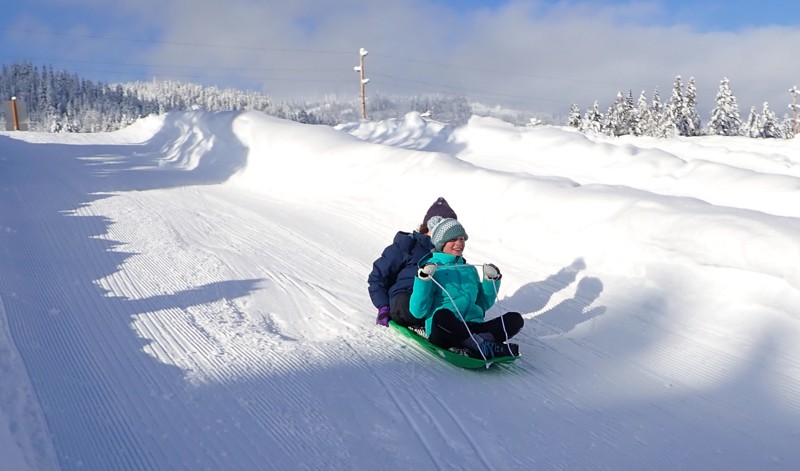 We then did some snow-shoeing, and in this photo, I'm the only one with snow-shoes on, making me a bit taller relative to the kids than I usually am. I like the happiness on my kids faces. That's what makes this one special. 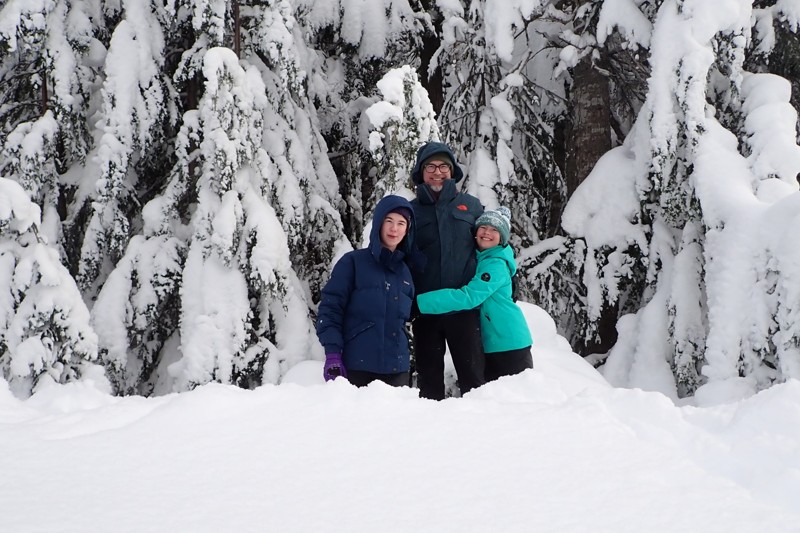 We also did some snow-shoeing near Alpental, and apropos of nothing, Delphine scooped a bunch of snow out of a snowbank. When I turned to check in on her progress, this is what I saw. She was laughing when she pulled her head out of the snow. 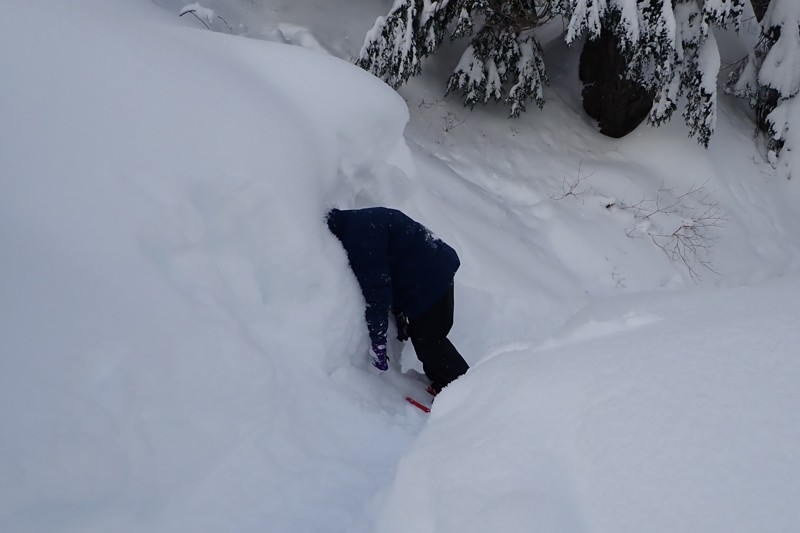 On the same snow-shoeing trip, we were having trouble finding a place to set up the camera (since it was all snow), and so we tried an arms-length photo of the three of us... and this is what came out. I'll keep photos like this one close to me forever. 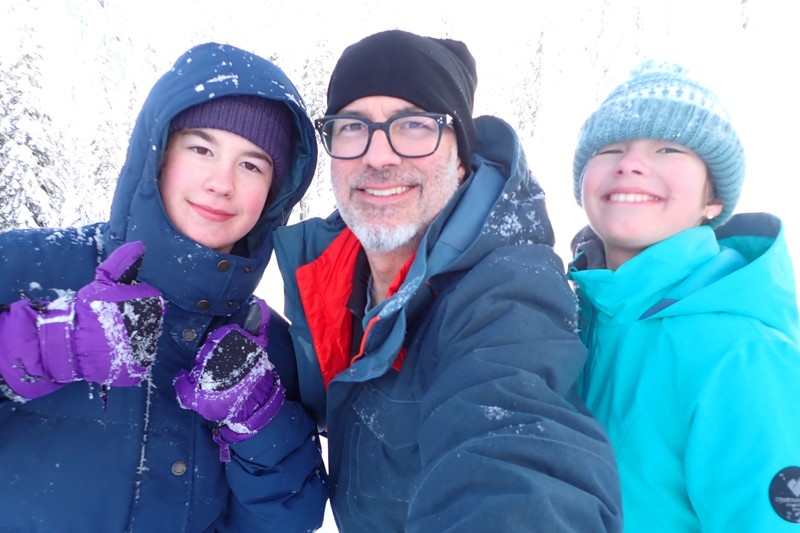 I can't believe it took me this long to hike Snow Lake, but I finally got around to it last November. I had a free morning and packed up my micro-spikes and Japanese language notes and headed to Alpental. Anyone who happened upon me during their hike first heard some clumsy Japanese, as I was studying a set of worksheets as I was hiking. 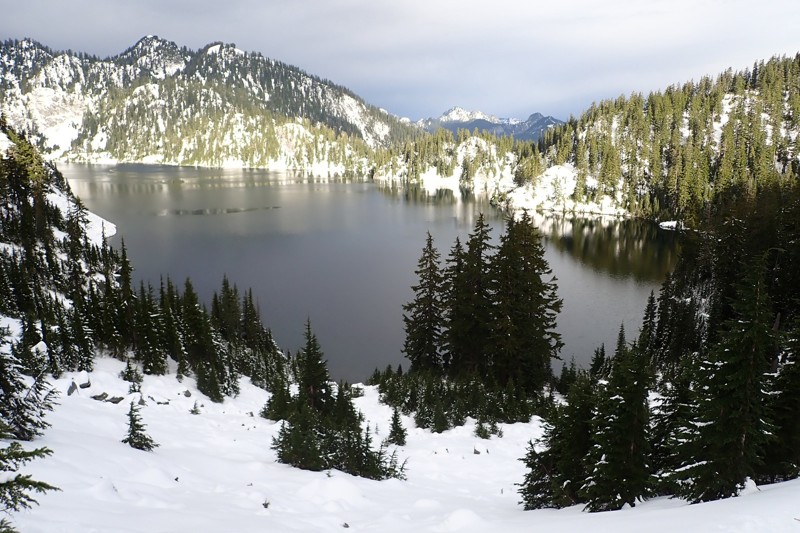 I hiked with the kids to Olallie Lake, and I always love photos in which Delphine is smiling, as is the case here. We had a great morning and ended up hurrying back to Delphine could attend a social gathering with her friends (suffice it to say we made excellent time on our descent). 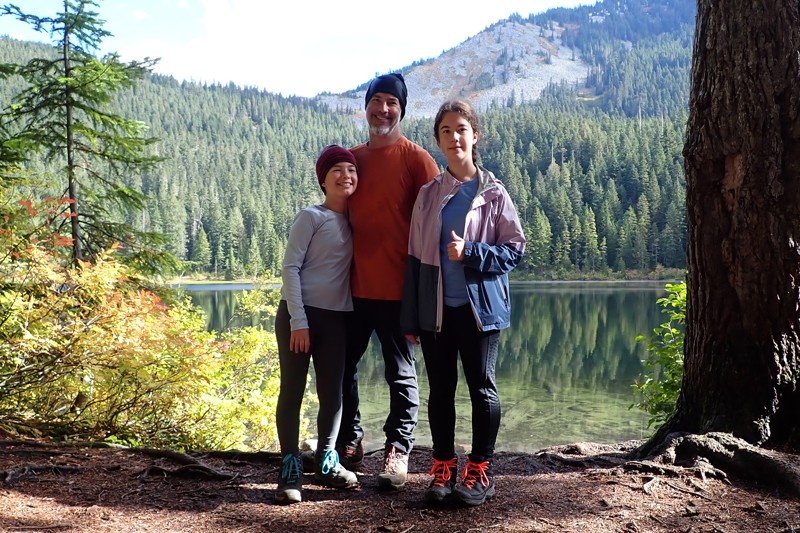 Trail Running With Alina (aka: "The Boss")

Of all the trail running photos I have (and I have a *lot* of these), this is easily my favorite from this year. I took Alina running with me (as part of PE), and it was raining the entire time and we got soaked. We took a break next to the Middle Fork river, and I set up the camera and told her "Cross your arms in front of you and try to look like a boss". This is how the photo turned out. 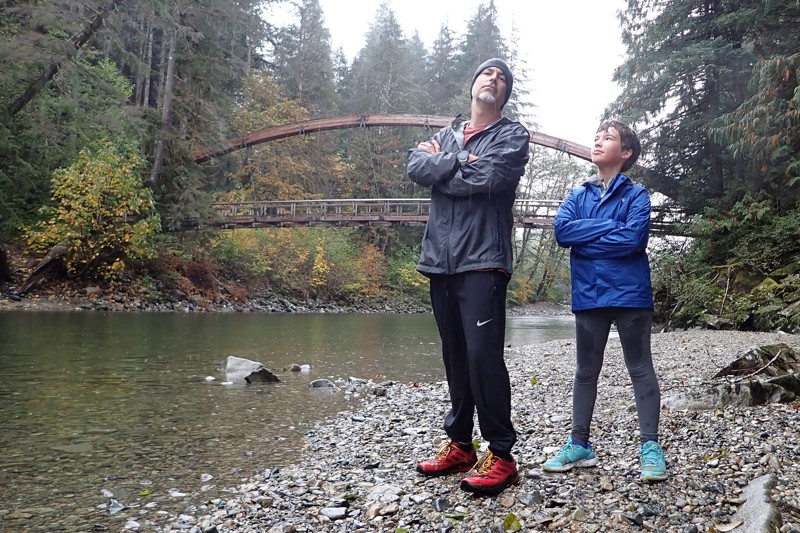 We usually try to take a "goofy" photo when we're hiking, and this one was truly inspired. Apparently we were going for "macabre / murder-mystery" .. and also apparently, none of us are actors. 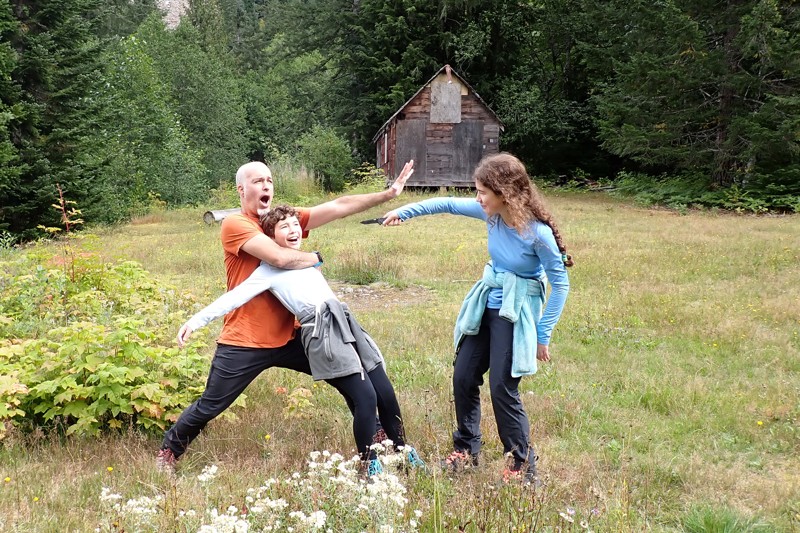 Sometimes it looks like Delphine is all serious, but I wanted to show just how close she usually is to cracking a smile. These were all taken in a 10 second span, at Monte Cristo ... in the last frame Delphine is just cracking up. 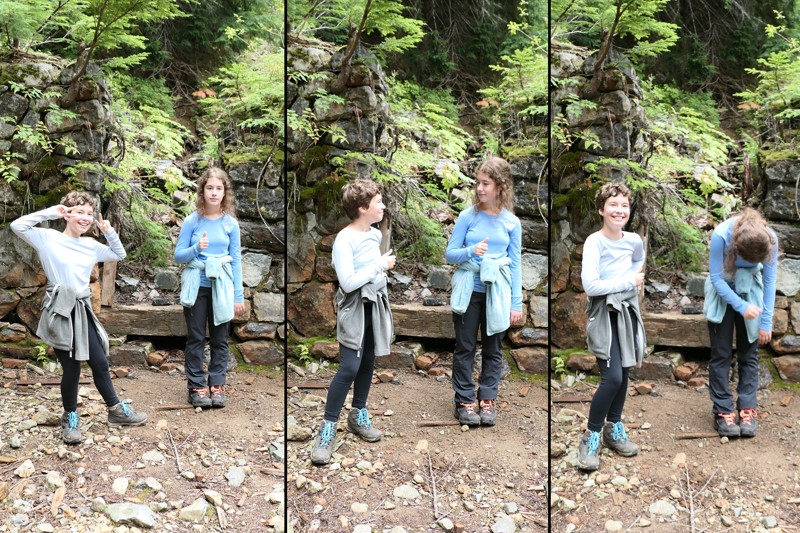 Inadvertently lovely photo from the trail to Marten Lake, taken in Sept of 2011 at about 7:35am. It was very unexpected to see this one when I got back from that trail run. The trail is gnarly, and doesn't really have any views, and so I think of this one as more of a "diamond in the rough" if that makes sense, as in: beauty in highly unexpected places. 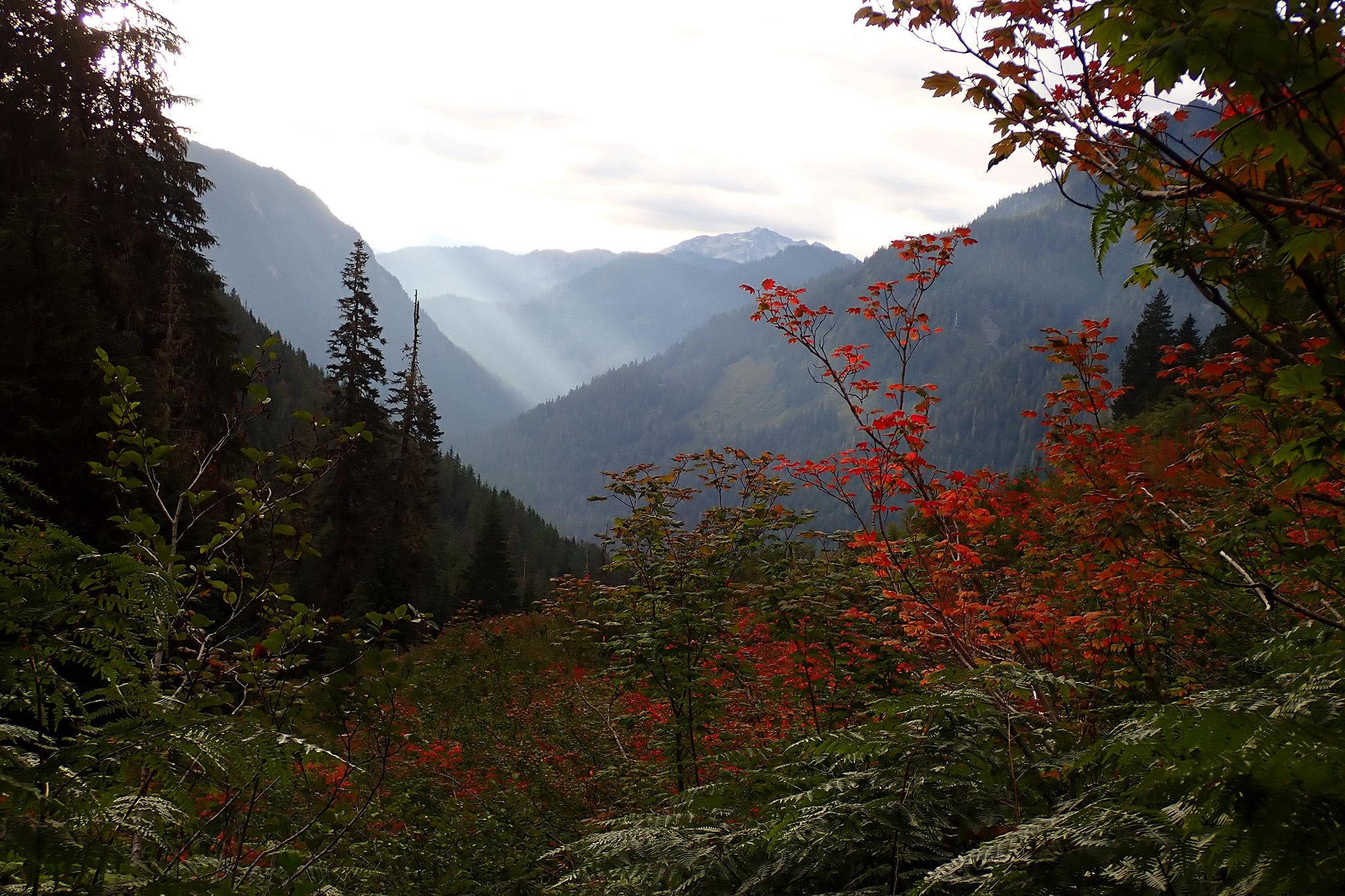 Arguably the biggest of the "big four", I was lucky to summit Del Campo (as it's usually outside of my skill and/or experience range). However, I met two hikers along the way and they helped me make my highly unorthodox summit of Del Campo. This photo was actually me giving up (on the errant ascent route) and waiting for my companions to come back down. 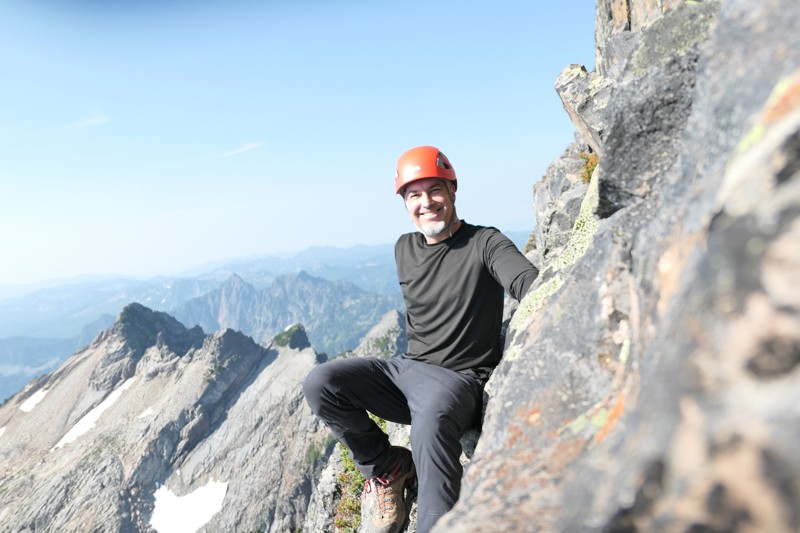 A north-ish photo of Morning Star (nearest), Mt Vesper (left), and Sperry (right). The views from the top of Del Campo were among the best I've ever seen. 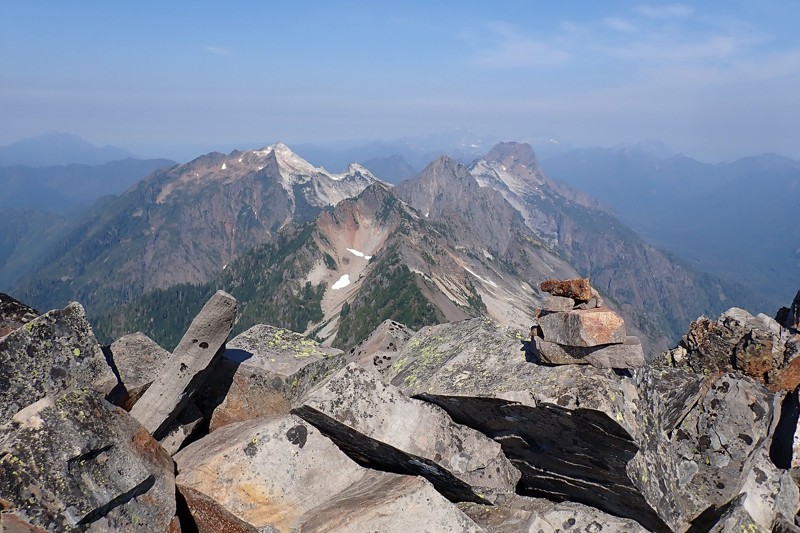 I think it's cool that Mt Pugh is in the background (left-hand side). This seems apt, as I summitted Mt Pugh two weeks earlier (it was a race against the wild-fire smoke that ruined the views and the wildfires in the Cascades that were closing a whole lot of trailheads). 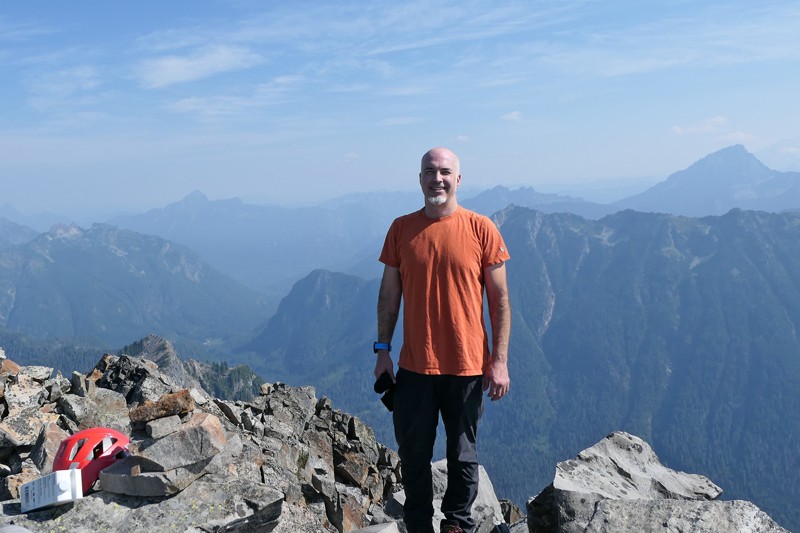 I told the kids "Okay, I'm going to turn my back now, and I want both of you to be as clearly disrespectful towards me in the most visually possible way". This was the photo (Delphine elected not to participate, but Alina was pulling for two here).

Part of the summer of "Laramee's Revenge", I finally summited Mt Pugh. I had hiked part of this mountain approximately five times before, including two weeks prior when I hiked to Stujack Pass and it was hopelessly rainy and foggy at the pass (and so I wisely turned back). It was incredibly satisfying to finally summit this one, and it's also the highest elevation of the big four at 7,201' (and the vertical gain is over a mile). 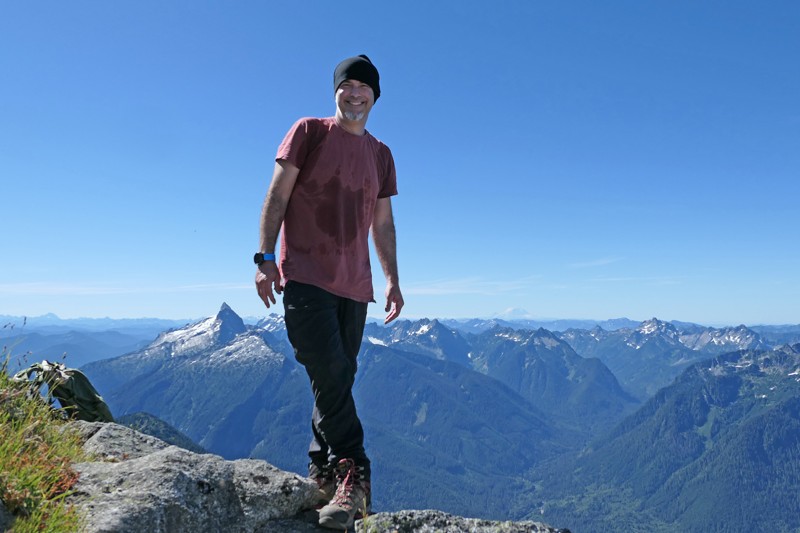 After an aborted trail run to Thompson Lake I finally made it to the lake. It's one of this regions most beautiful lakes. It's huge, and the lake basin is steep and dangerous, but it's totally worth it. I re-ran this one in the winter and the photos weren't nearly as good (though the lake itself was similarly beautiful). 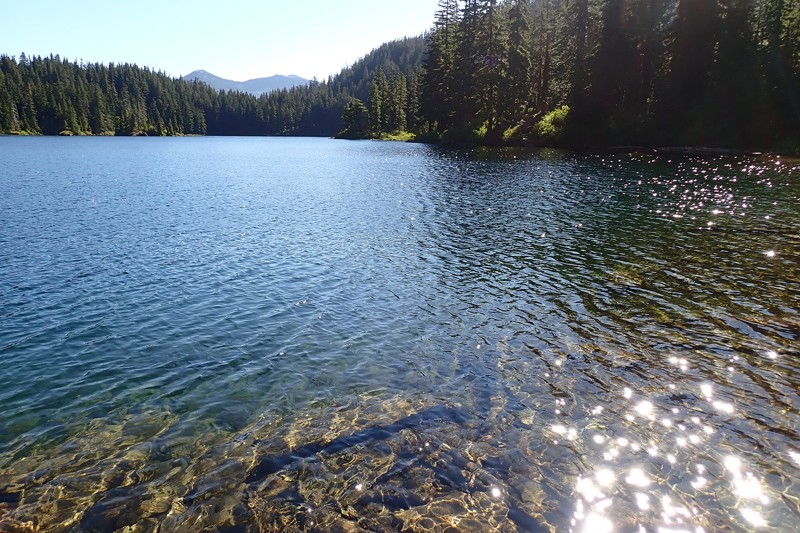 Arguably the best photo I've ever taken. This is Rainy Lake, but from the tumble-down boulder field that I suspect most hikers eschew because either (a) they're too tired to explore once they get to the lake or (b) it's not on the same side of the lake at the continuing trail to Mt Preacher. There's just so much to like about this photo. It's worth noting that Rainy Lake is one of the most punishing trail runs I've ever done and I'm decently incredulous every time I actually arrive at the lake. 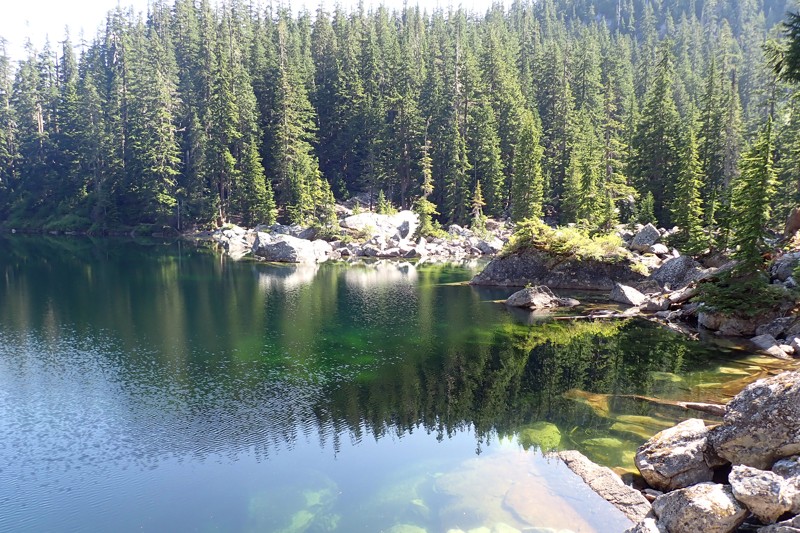 The best photo of Mt Rainier I've ever taken. This was from the south side of Mt Pilchuck, before I got hopelessly lost and set off my emergency rescue beacon. 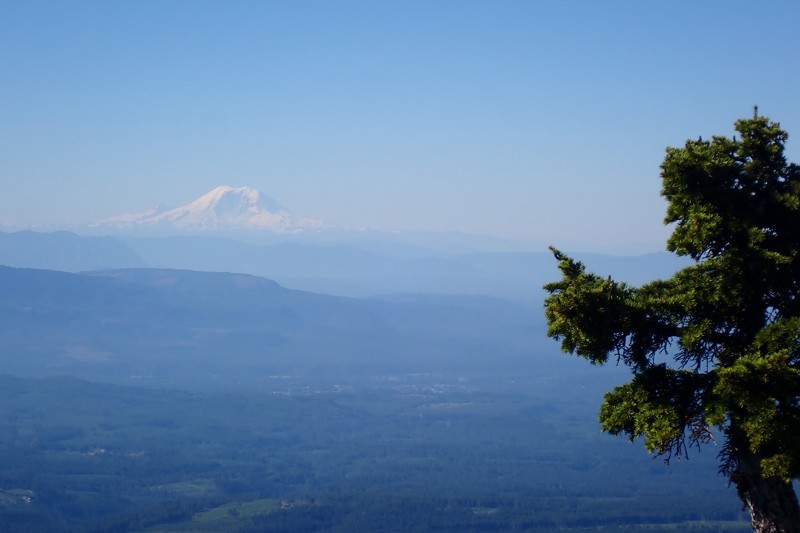 One of the "big four" hikes I did this past summer was to Mt. Dickerman. This is such an amazing hike for being only a little over an hour's drive from Seattle. Clear skies and about 270 degrees of view. 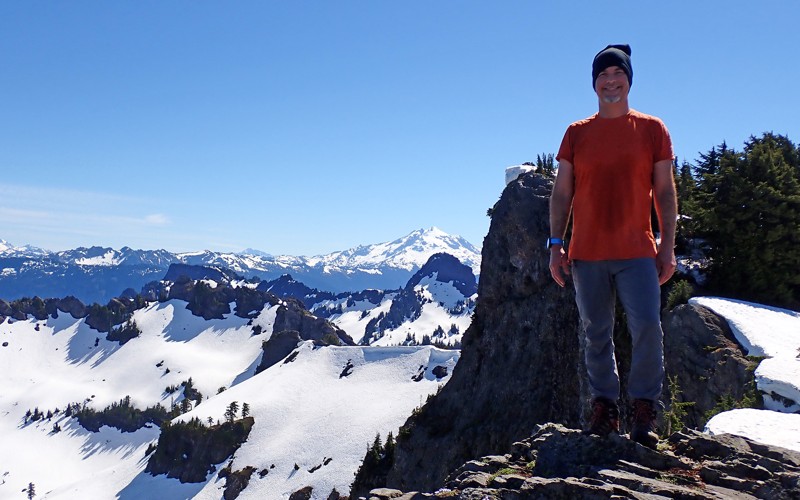 This was taken on Quartz Ridge, and we decided to try to make an album cover, in case we started a band. The name of the band was going to be "The Bubble Noises" and this would be the [amazing] cover: 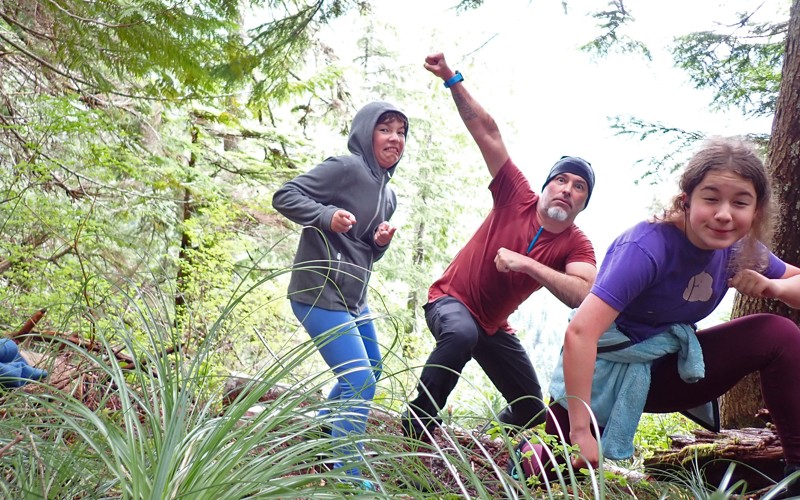 I think this is my favorite photo from 2011 of just Delphine and I. It's special because I think it captures a genuine Delphine smile, which can be elusive, in terms of capturing it on a photo where she knows it's coming. 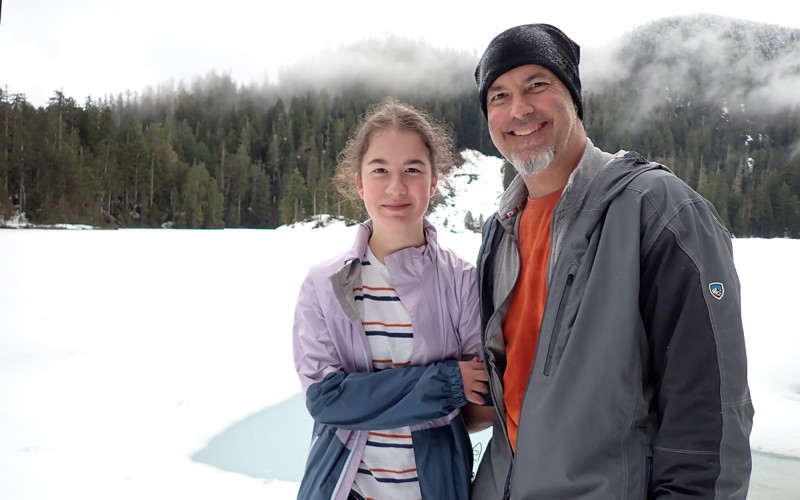 We set off for what was allegedly Snow Lake, but alas, we had the wrong trail, and it was ruinously steep (it was insane). You can get a sense of this from the photo itself. The kids were amazing sports. We only went 1/2 mile due to hazardous trail conditions. 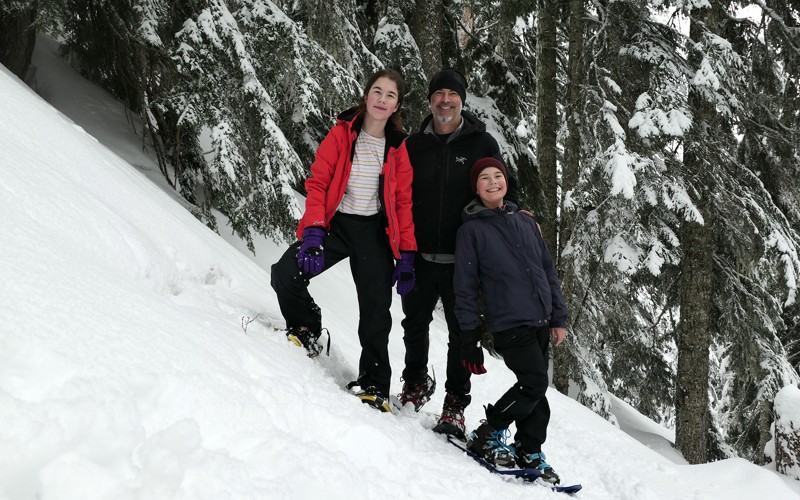