Blanca Lake Probably Needs to Be Seen In Person

The lake is visually stunning and unique, and really has to be seen in person to truly be appreciated. I made an audible gasp when I caught my first glimpse of it's surface color. Over the next hour or so, as more and more of the lake was bathed in sunlight, it turned into a slightly milky-turquoise color and was beautiful to behold.

Here's the best photo I took: 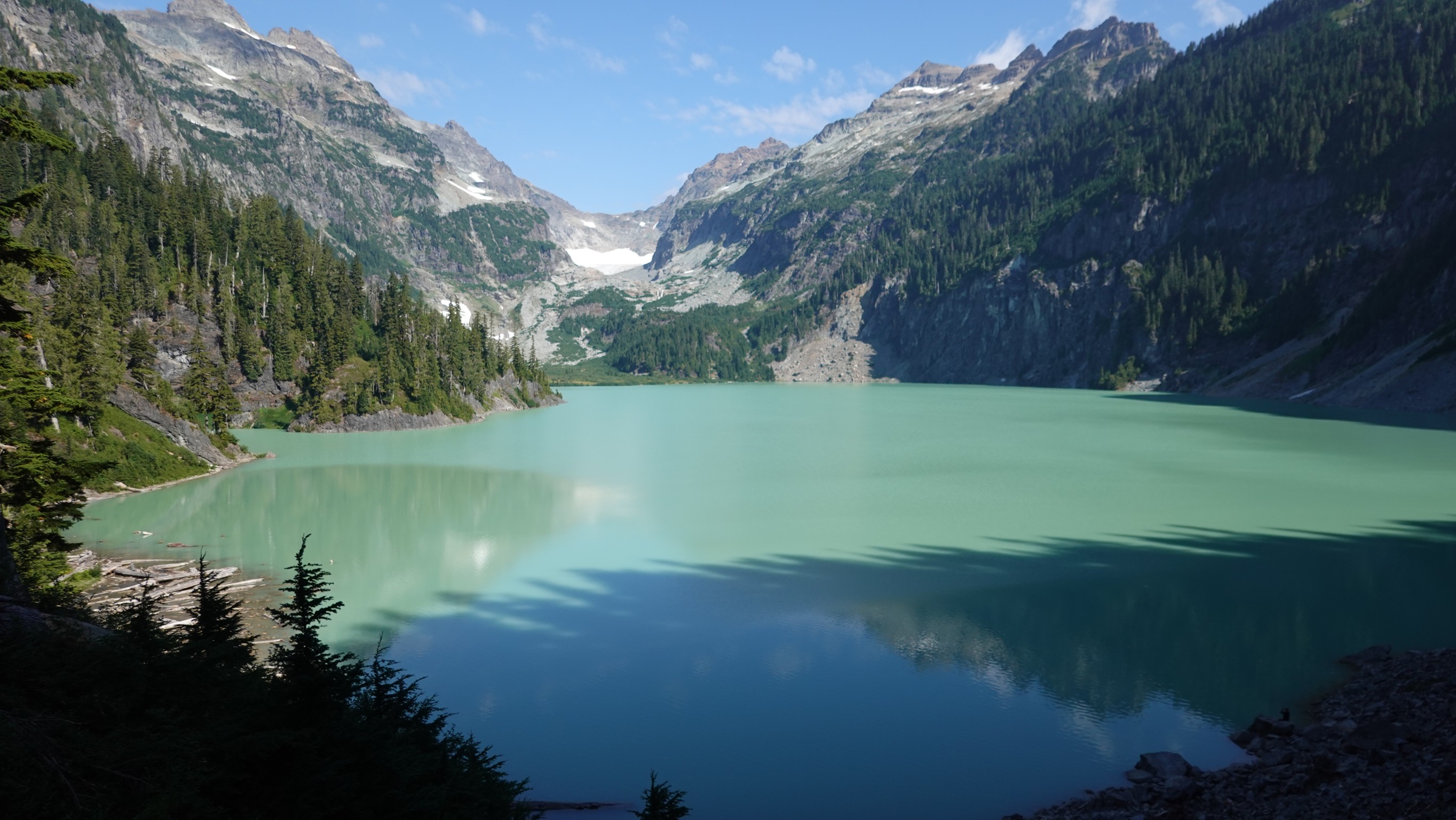 Beautiful photo of the lake in the morning light, with Columbia, Monte Cristo, and Keys in the background.

What's fascinating is that Blanca is the only lake in that area with that unique color. Check out my ascent map, and you can see many lakes in that area, but only one is green: 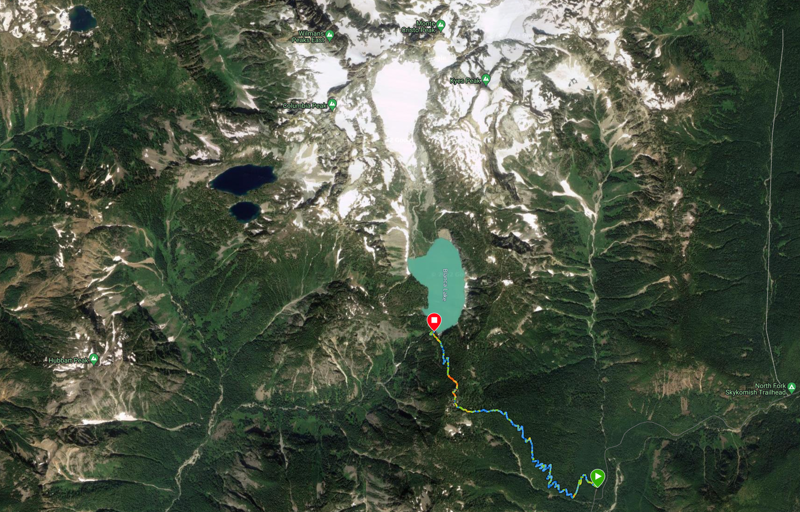 The explanation for the lake's color is glacial till, which is loose rock and minerals underneath the glacier that are picked up by glacial melt and deposited into the lake.

I found the hike itself to be very un-noteworthy for the first ~two miles (it's just a bunch of rote switchbacks along a well-maintained trail), but once you get up on the ridgeline that takes you to the lake basin, there are some decent mountain views and the overall scenery along the trail is lovely (there are grassy meadows, and blueberry bushes, and it's just very verdant and alive).

Here is my ascent and descent. This one is described as "draining", but I found it to be fairly straightforward. It's only 2,700' of elevation gain on the ascent and 650' of gain on the return[1].

The lake is incredibly unique. I took a bunch of photos to try to capture the color as best I could. The initial photos are early (9:30am), and the later ones were taken closer to 11am (and there was a lot more sun).

Note: all images are clickable for higher-rez versions, and the left-arrow and right-arrow keys will allow you to peruse all images. The ESC key closes the preview window. 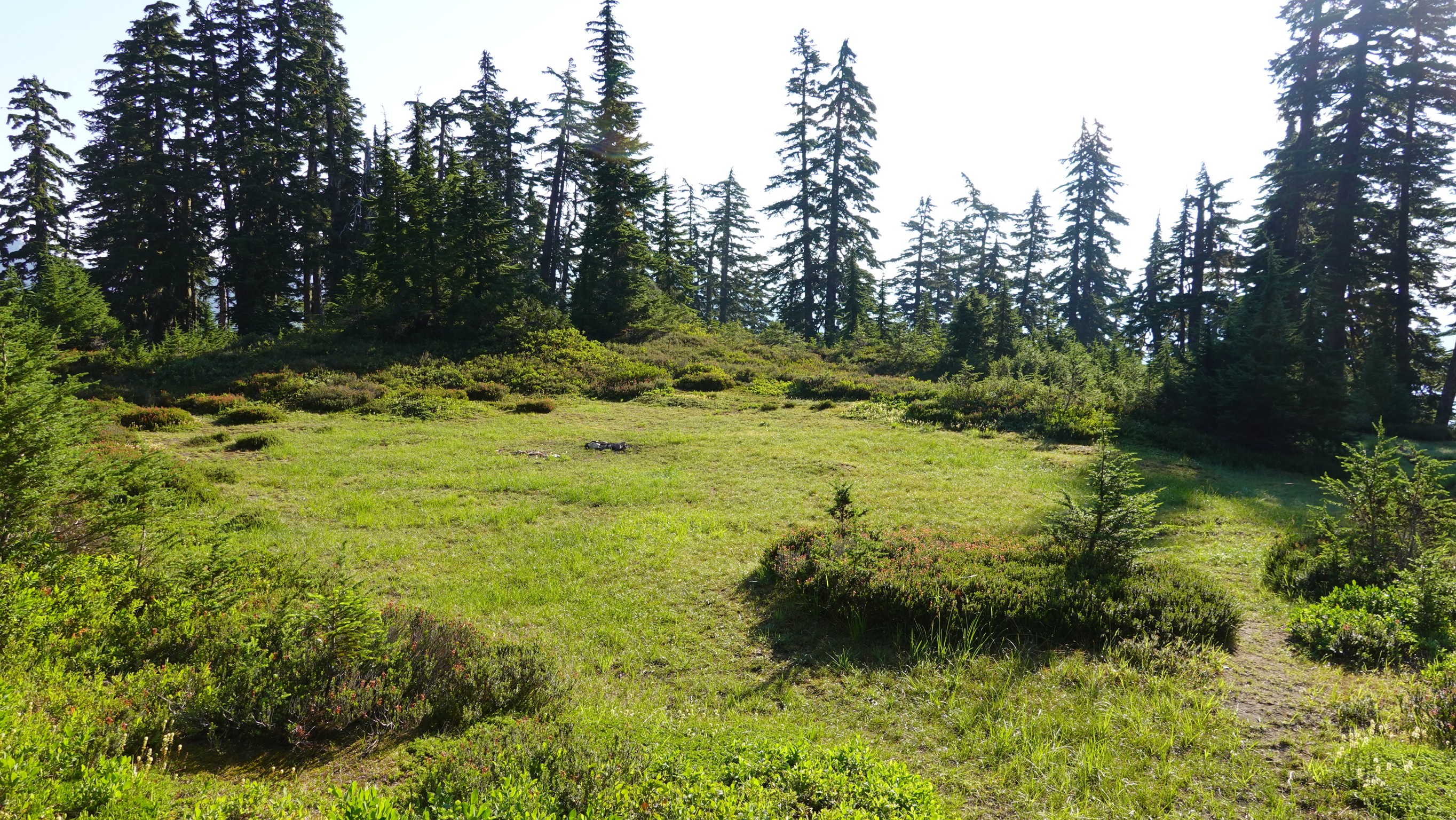 Once you get to the ridgeline, there are all of these grassy meadows. Apparently, this place is popular for camping (and I can see why). 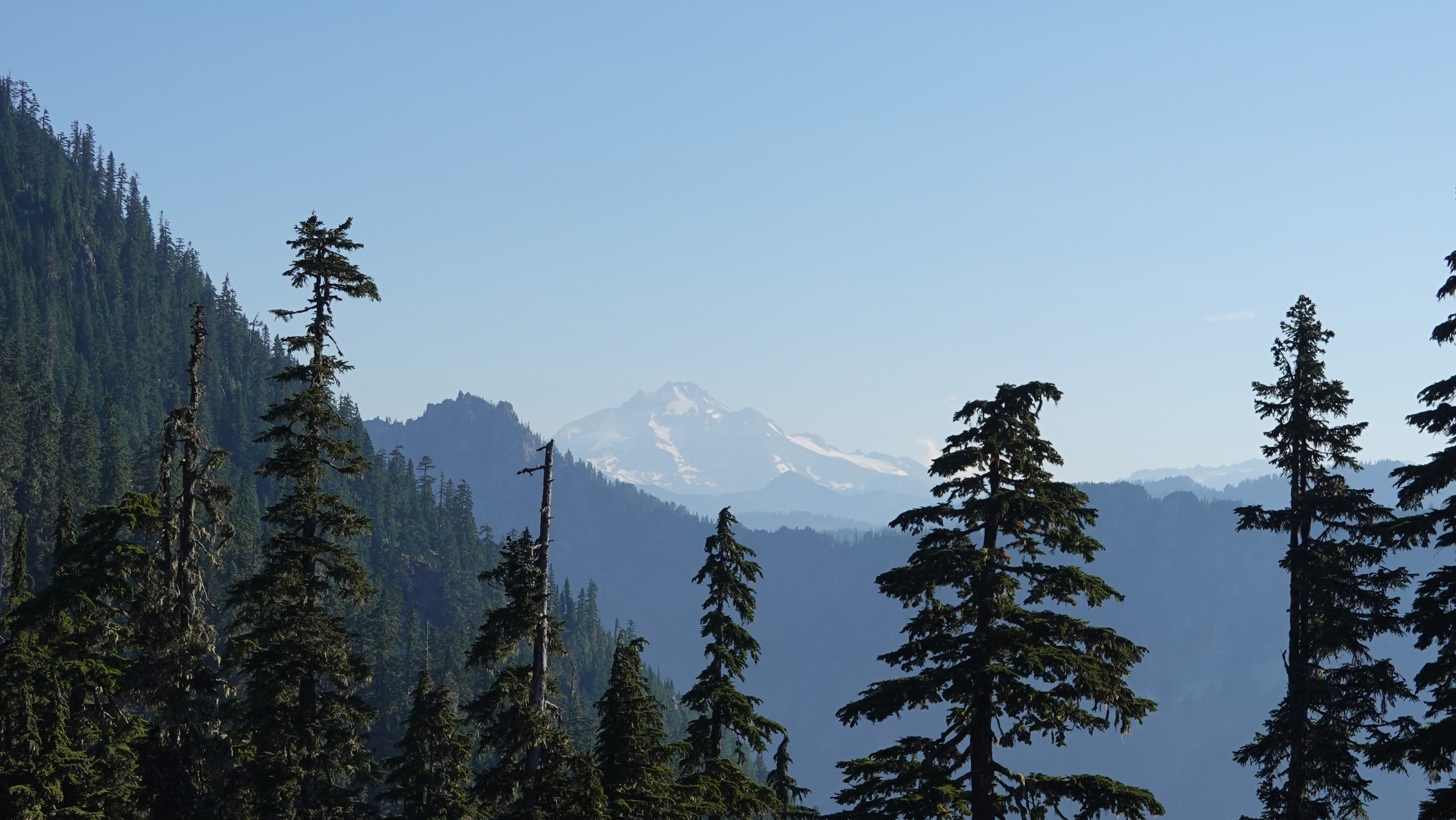 Glacier Peak. There weren't a lot of views along the way, but it was nice to see some mountains making an appearance along the way. 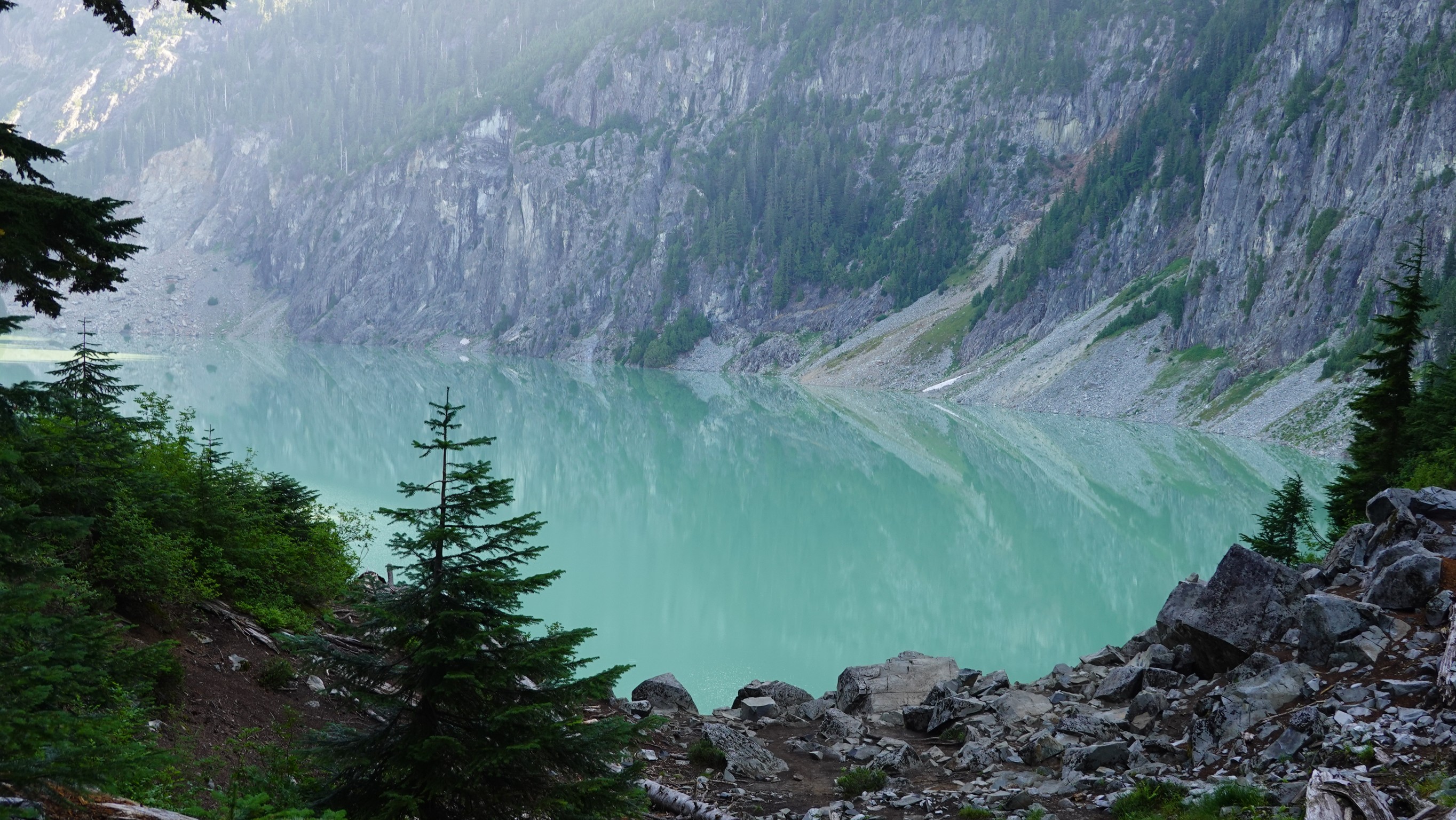 My first view of Blanca Lake, at approx. 9am, easily made the journey worthwhile. The color is stunning. It's incredibly unique. 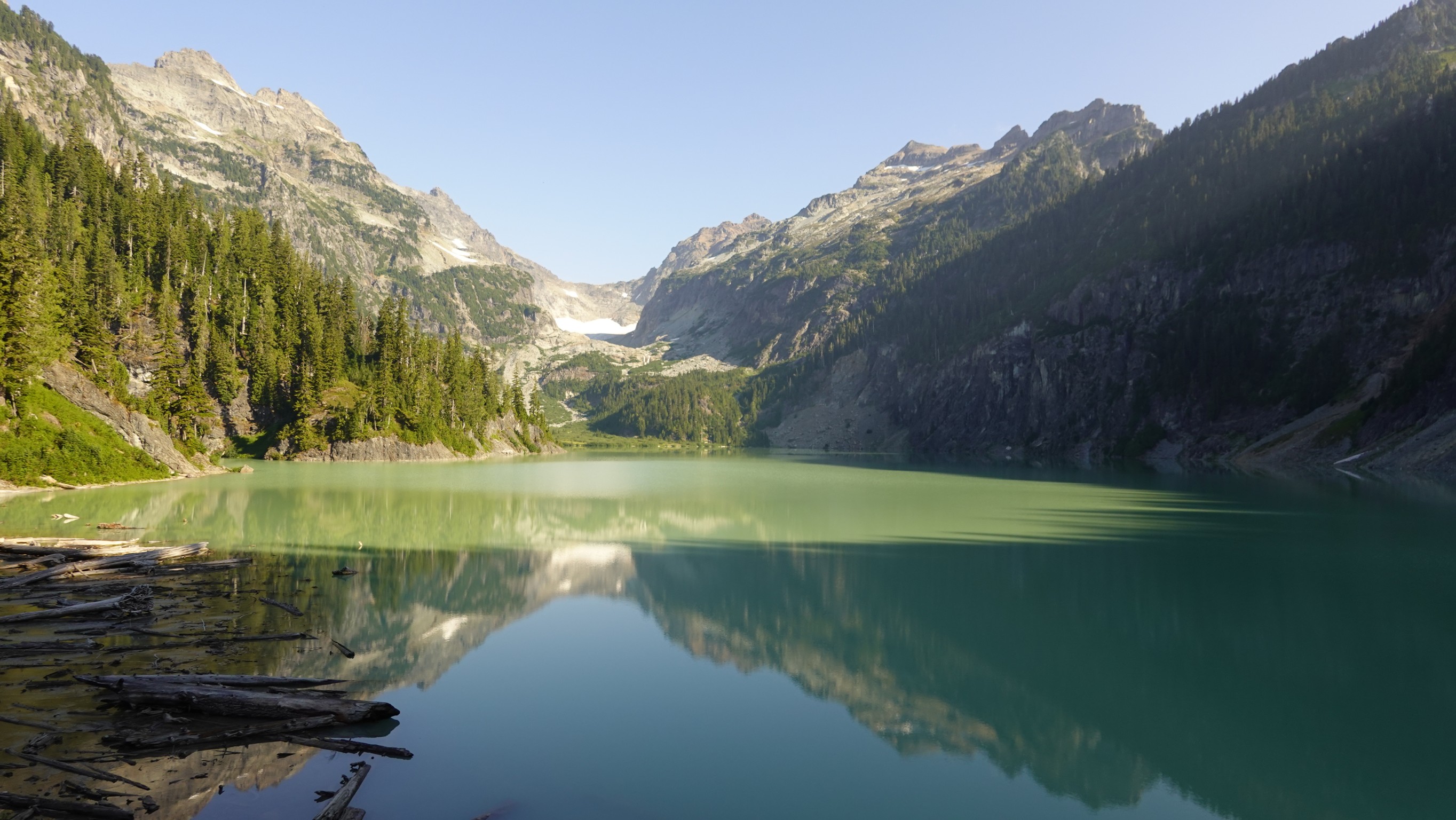 The glacier that supplies this lake with water is called Columbia Glacier and apparently it's the glacial till that gives the lake it's color. 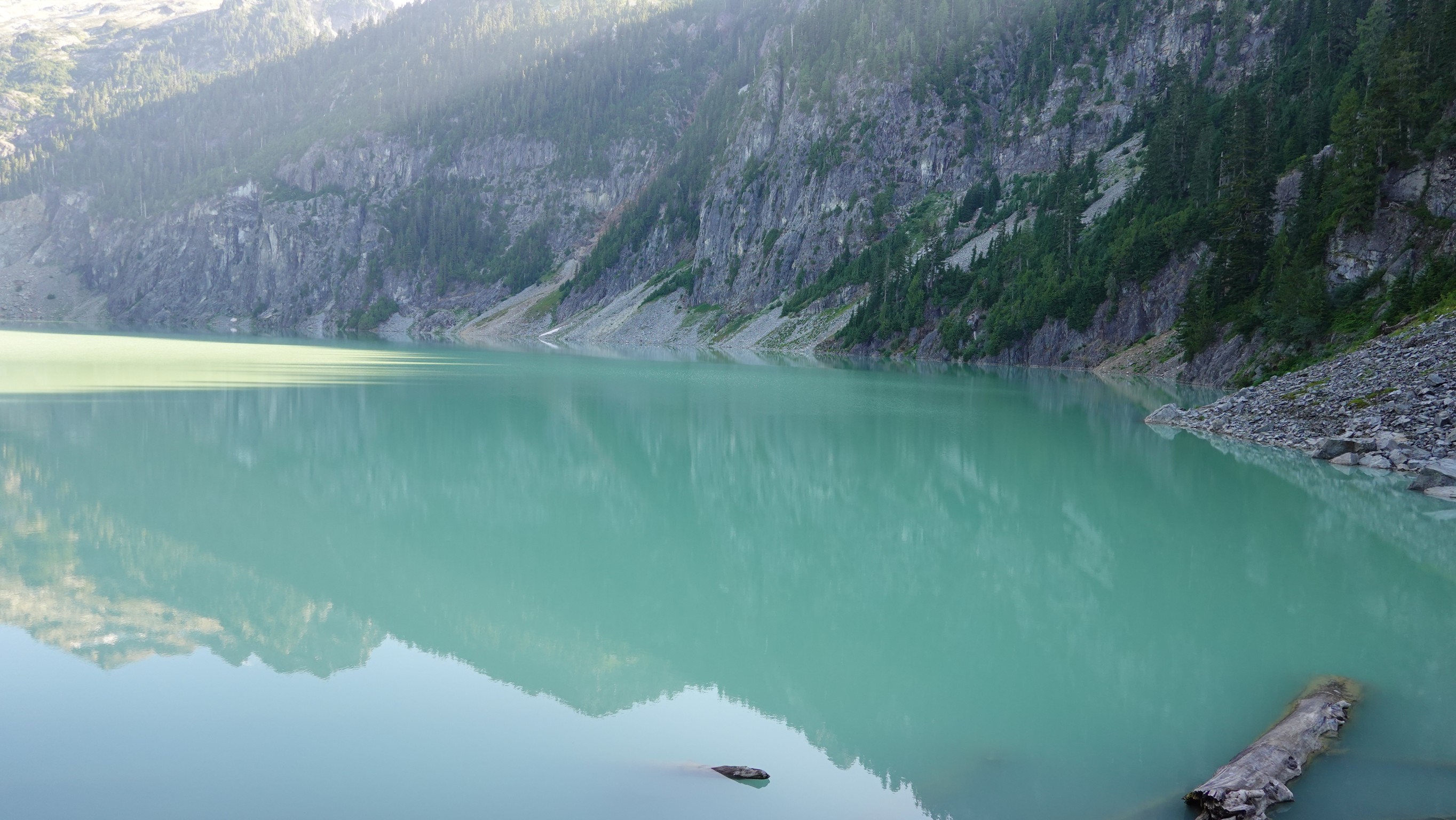 As the sun rose, you can see it totally lighten the color of the lake. The shaded part is the "truer" color. 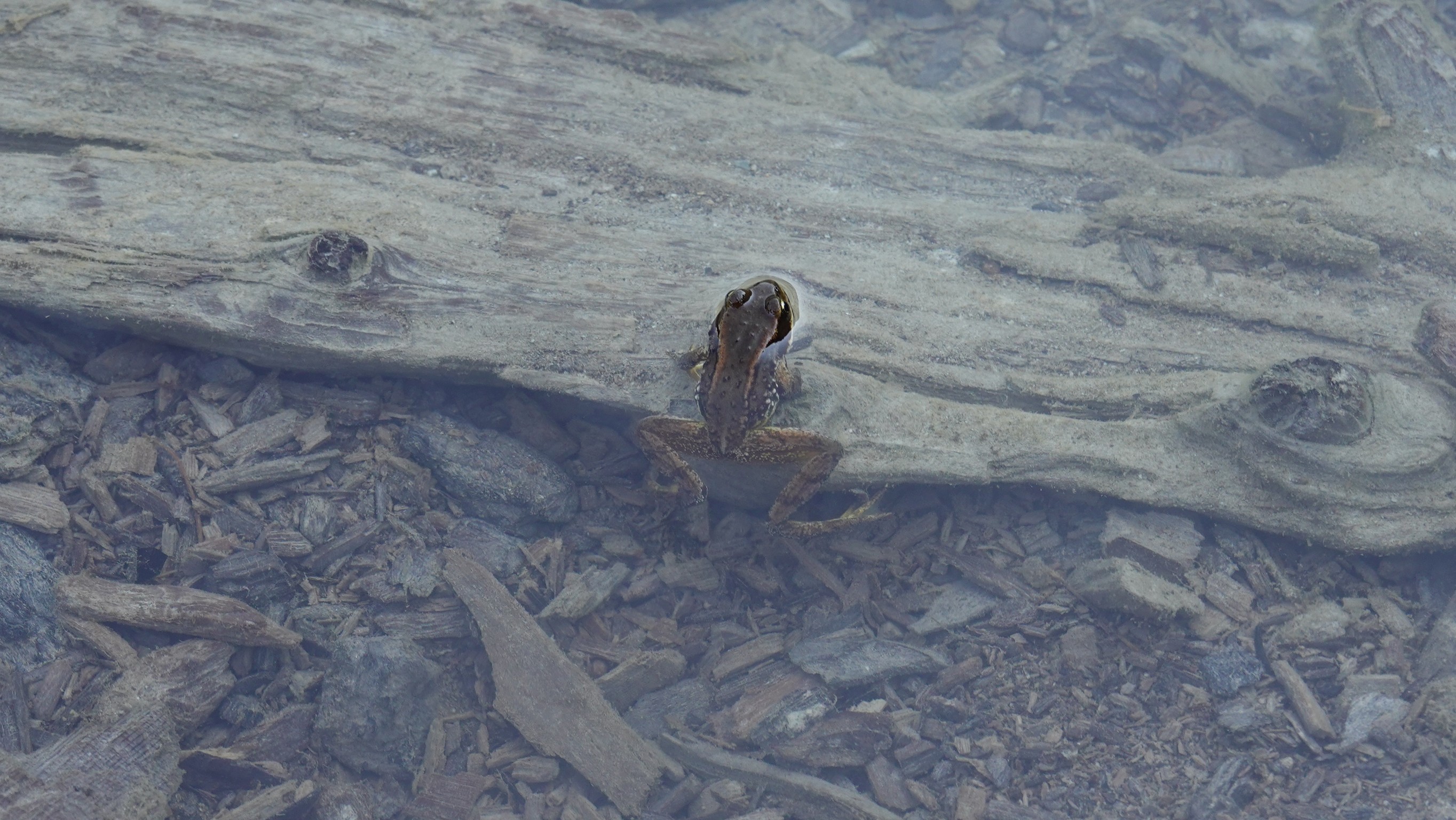 The water is absolutely crystal clear when get close enough to see it. It's a very dynamic, living lake. 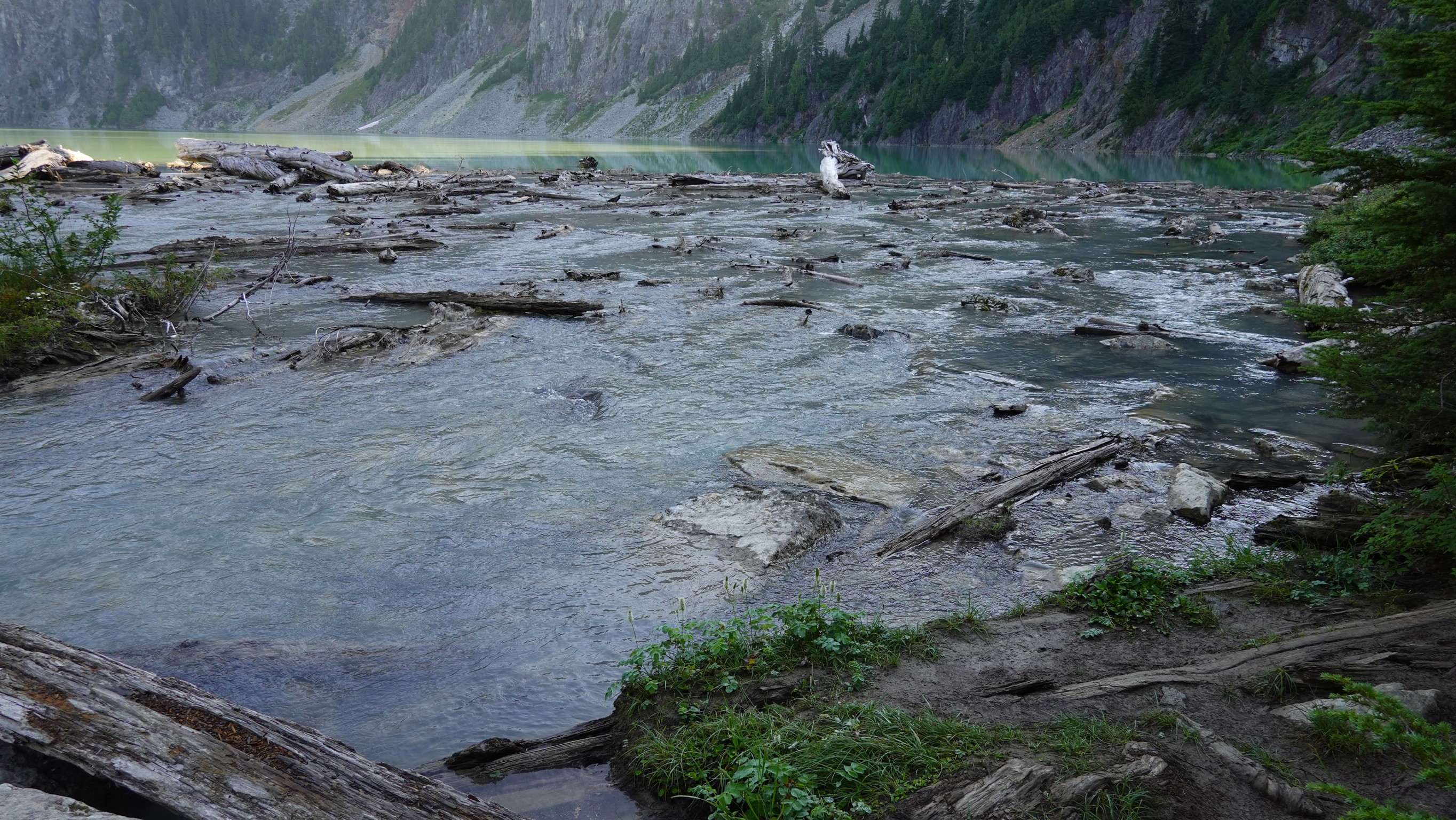 The outlet of the lake as it continues to flow along Troublesome Creek. The outlet flow is massive. 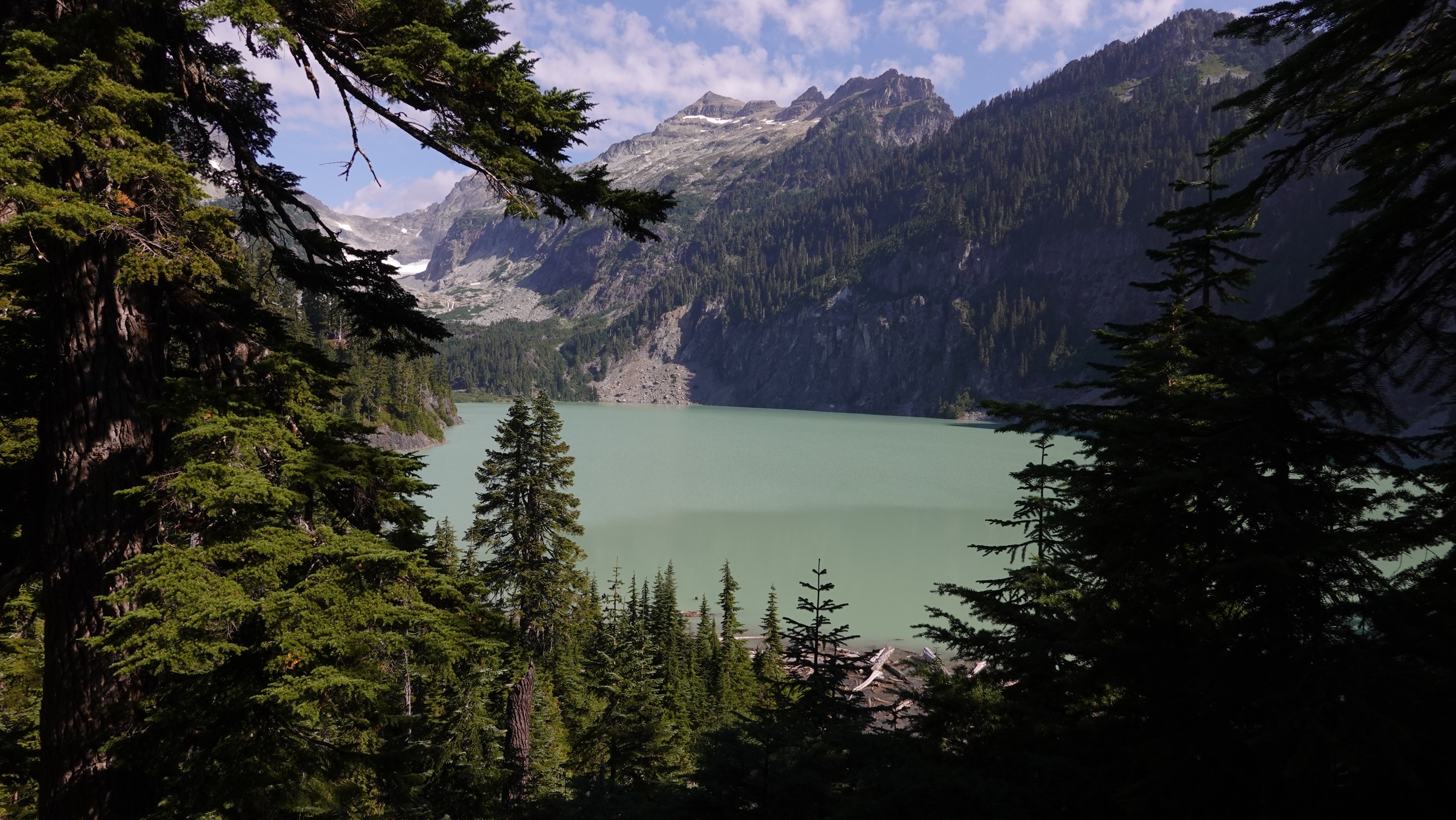 The best photos of the lake are from just above it. This is from the trail very close to the end. 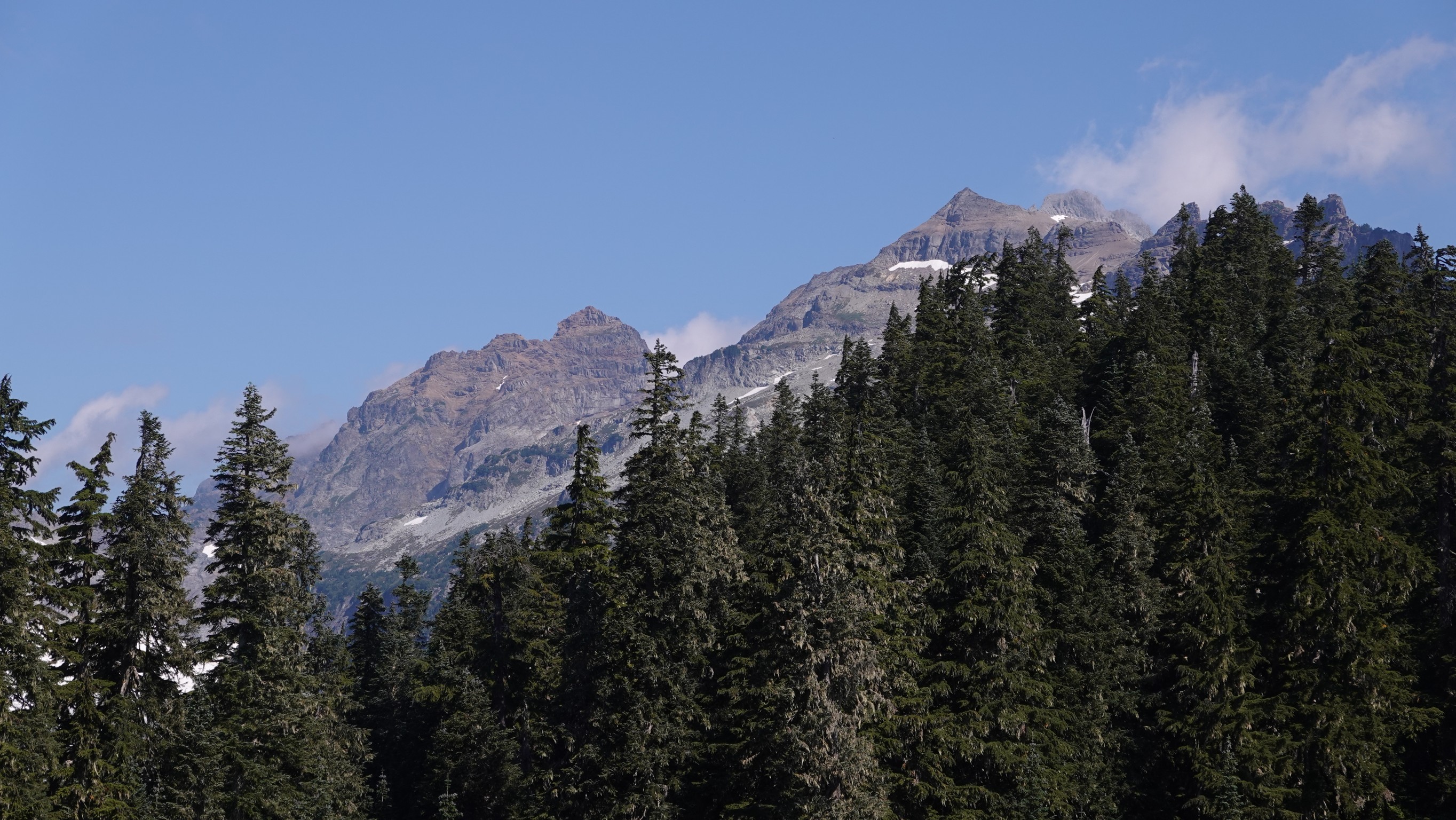 Looking north, Columbia Peak (left) and Keys Peak (right). Coming back down I could see clouds rolling in, so my timing of hiking really early was good.
Footnotes:
[1] (read: it's for candy-asses)
&ndsp