As It Turns Out, Black Bears Are Both Scary and Beautiful

I had my first bear encounter today and it was, in a word, scary.

I set out trail running on a very-little-used trail called Quartz Ridge. It's also the path to the old Nordrum Lookout location.

It was relatively early, about 7:30am. A sufficiently civilized time to sleep until 6am and yet early enough avoid the sleep-in-then-hike crowd of amateur weekend warriors.

The first thing I noticed after I set out was that my old friend Mrs Owl was stalking me. This became clear just a few hundred feet into the Quartz Ridge turn-off, when I noticed her swoop low over the open space of trail I had just run. I do suspect that this was the same owl that I tried to befriend last year but only managed to supremely irritate, whereupon she attacked me multiple times as I tried to get away from her (Quartz Ridge is adjacent to the CCC 1264 trail, specifically, the switch-backs where I was attacked. It's all the same territorial area.)

Mrs Owl and I played a game of hide and seek on the way up the ridge. I kept an eye on her location as she swooped back and forth, and only ran from tree-to-tree so I could take periodic cover. I always kept the trees between myself and the owl, thereby eliminating the direct attack path.

As a Quick Aside: I learned last year that the primary attack MO of owls is to (a) locate their prey (b) wait for a direct path of attack (c) silently drop out of the tree to begin the approach and (d) grasp the prey in absolute silence and in total surprise (e) only then does the owl beat it's wings to make it's first sound. The totally silent approach (TSA) of the owl makes it an incredibly effective hunter, and I figured I could use this to my advantage.

The game of hide-and-seek didn't last too long, just over a 1/3rd of a mile, and by the time I got to the old Nordrum Lookout site I began to think that perhaps I was out of the owl's territory (though only time would tell).

The trail then continues for a very short section across the ridge, as it prepares to dip into a valley to cross a creek. 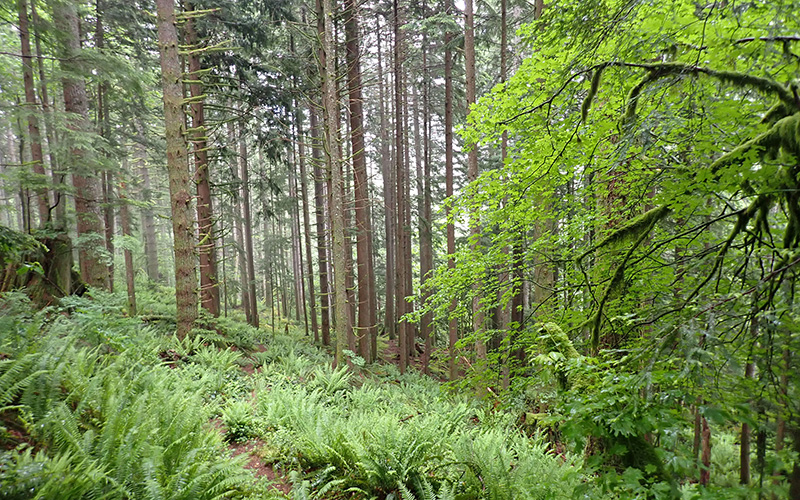 The Quartz Ridge Trail Near the Creek Crossing

The map below shows this area well: 1/3rd of the way along the path, it descends into a valley to cross a creek before proceeding up the ridge: 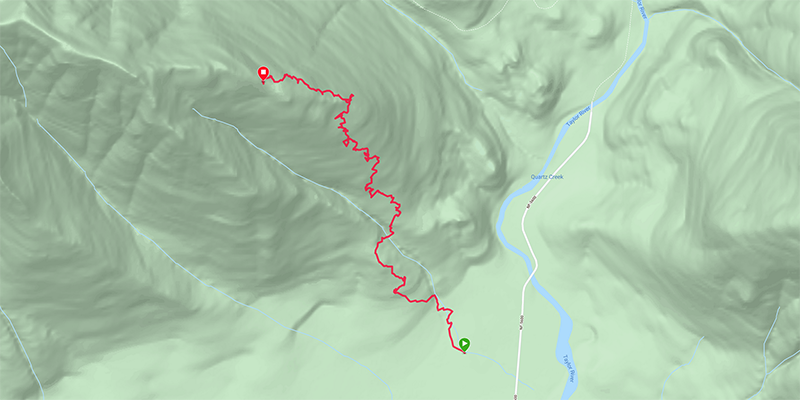 The Full Trail to Quartz Ridge

I was approaching the descent when I spotted a bear. It was directly north of the trail, about 100 feet away. I saw it before it saw me. It was a juvenile: cub-ish, though not a cub. My guess is it was in the 150-200lb range. It's fur was pure black, and had a visible sheen to it. This bear looked healthy to me.

The bear noticed me and stopped foraging. It stood up for a second to check me out, and then dropped back onto all fours and ambled away from me, N/NE, towards the creek bed and up the ridge.

I actually contemplated continuing my run, but only for a minute before I came to my senses. I think I convinced myself that while I might be able to get up the ridge, it could be a huge problem getting back, if one or more cubs (and therefore the mother) was foraging in the area between the ridge and the trail start (and since there was a low probability that anyone would happen along the trail later on, I didn't like my chances of getting help).

So I backed up against a huge tree and stood completely still, listening, and looking all around for other bears. It wasn't clear to me if I was in between a couple of cubs, or if they were clearing out of the area. My heart was racing the sweat was just pouring down my back. I could hear the occasional cracking of a branch as the bear moved away [hopefully] from me, and it was raining, so the forest was alive with noise.

After I was convinced I had waited long enough to know I was [relatively] alone, I decided to quickly and quietly back up down the trail, so I turned and started walking. Two minutes later I noticed that the trail had disappeared, and the landscape looked wholly unfamiliar. I realized that I had wandered off of the trail and was quite lost. My heart was absolutely hammering inside my chest, and undoubtedly the adrenaline was rushing, and I sort of started to panic with the realization that to find the trail again, I had to back-track to where I had seen the bear (that and: if I actually met up with another bear I was both alone and lost).

I think this was the hardest part: going back to what I thought was a dangerous place to be.

This map shows where I saw the bear. Also: The end of my run that day. 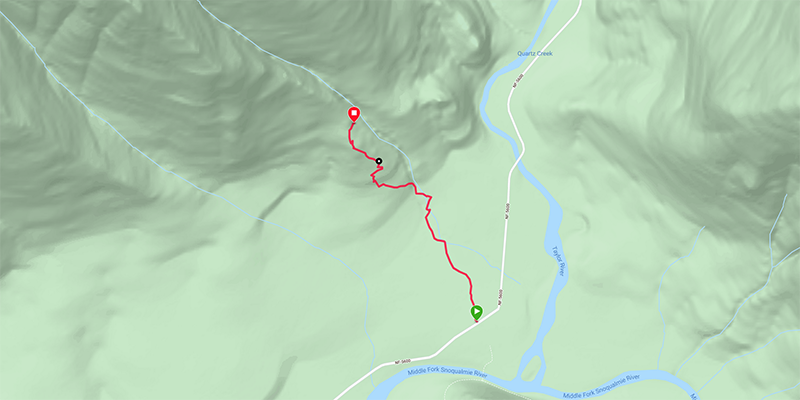 The Quartz Ridge Trail Near the Creek Crossing

Luckily I found the trail and was able to follow it back to the Nordrum Lookout site. I rested for a minute or so while trying to decide how likely a forthcoming owl attack was (I settled on "near 100% probability"). My last owl encounter was actually two encounters back to back: she started diving at me on the run out to the Middle Fork river, and then waited in a tree on the edge of her territory for me to come back, whereupon I was attacked a second time. I literally saw her waiting for me in a tree near the beginning of the CCC 1264 switchbacks.

Since I was pretty sure the owl was waiting for me, and honestly I was in no mood to deal with this, I found a stick, approx 1" in diameter and approx 2-3' long and carried it as I ran, above my head, to try to avoid being surprised by a silent owl approach. I then proceeded to play an accelerated and reckless game of hide-and-seek, taking frequent refuge under fallen tree roots or behind huge trees.

As if on cue, the owl did make a couple of swooping passes above the trail. She was definitely waiting for me to come back. We did our little dance (I spoke to the owl "I see you. I know what you're up to."). This may seem a little odd but to me, the owl and I had established plenty of rapport to begin a conversation. We had history, this owl and I. And conflict.

Something tells me that my encounters with this owl are not over.

It would be okay if that encounter with the bear was my last.

I went on to run Stegosaurus Butte and about 1.25 miles of Rainy Lake, both mercifully without incident. 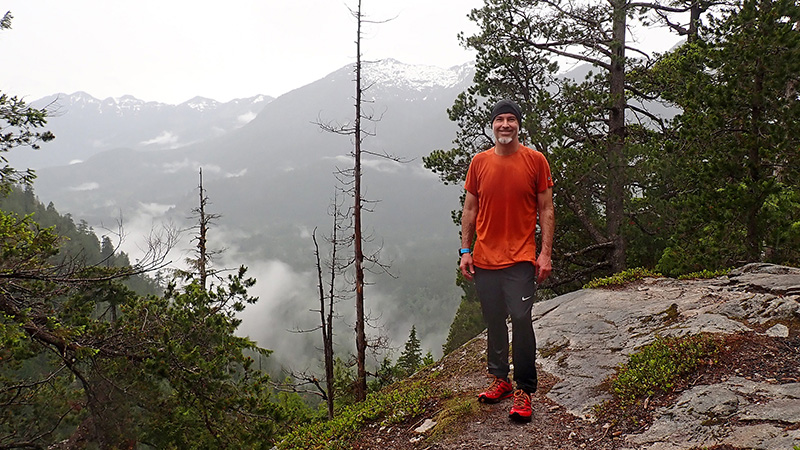 Safe and Sound At the Top Of Stegosaurus Butte
&ndsp