It is a really bizarre time to be alive

Nearly all of the socio-political discourse that has taken place over the last few years has taken place in the context of "the luxury of disagreement", meaning, when two groups of people disagree, it largely doesn't matter.

E.g.: the "flat earth movement" is actually pretty sizable these days, and a lot lot of people are posting a lot lot of comments arguing the point of view that the earth is flat[1]. Ultimately, it's not necessary to reconcile what these people believe with what's actually true, as life will pretty much carry on for the rest of us unimpeded by this nonsense.

Political propaganda has been fairly effective over the past few years, and largely, there's also been no compelling reason to reconcile what's propaganda vs. what's real.

E.g.: take, for instance, the "Obamacare death panels" propaganda[2], started by Sarah Palin during early drafting of the ACA. These death panels were not real, and then were never going to be real. There was no way to reconcile this propaganda with reality because logically, you can't prove a negative. Same goes with the "birther" movement, which was just a racist attempt to delegitimize our first African-American president.

QUICK ASIDE: If I told you "prove that I can't fly", you would be unable to, as you cannot prove a negative. Said another way: the absence of something is not sufficient proof that it doesn't exist. Said even another way: "not seeing me fly doesn't mean I ultimately cannot fly, it simply means either (1) you haven't observed it yet or (2) I cannot fly / it doesn't exist". To get anywhere in settling the issue of whether I could fly, you'd have to prove the positive "prove that I can fly", by having me fly, pointing to me in the air, and concluding "yes, you can fly" (read: it only takes on instance).

But right now, we're in the middle of what I believe to be the logical extreme of not reconciling propaganda with reality. Two very different sides, unable to be reconciled, with incredibly consequential outcomes.

THE REALITY [3] [4] [5] [6]: The virus is spreading rapidly. People are dying. The reality is very clear, and only the most subjective mental contortions allow one to deny these things. The data is all out there, for anyone to consume, and from multiple independent sources. While one might not be able to get "100% clarity of truth" (assuming such a thing even exists), one can get in the same ballpark as the truth and understand the trends in the data (both past and extrapolating into the future). And of course, there are people dying .. so, there's that as a data point. Oh, and we also lead the world in total number of coronavirus cases.

THE REALITY: Medical supplies are in critically short supplies[9].

This we "have this under control"? Check out this graph: 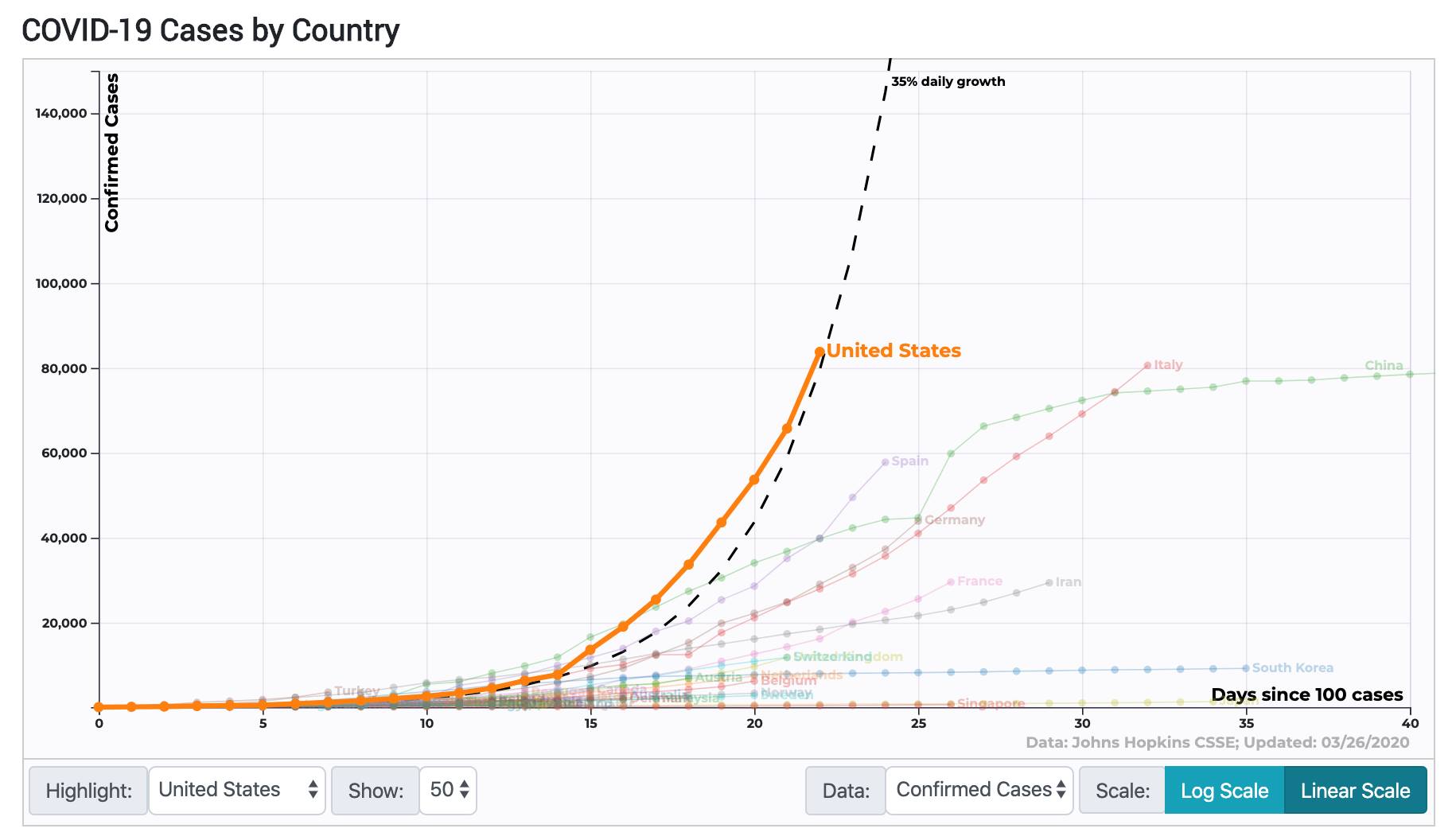 So now the consequences of failing to reconcile the propaganda with the reality are real, and they are severe. And I think that's what's interesting here - we seem to be at a tipping point in terms of just how far the propaganda is away from the reality - and it's impossible to reconcile them. There are literally two versions of what's real, and only one of them has any accuracy in describing what's actually happening.

At a minimum, we will get some insight into just how far away a person's perception can be from reality .. and not based on a lot of history, or a dozen season of watching the NY Giants lose, but from something incredibly novel with a history of only 3-4 months.

Personally, I think the time when the rhetoric stops, for many people ("the deniers"), is when someone they know is personally affected. As soon as your grandmothers retirement community has a positive case, or you lose a coworker, or you show up to the hospital for routine-ish treatment and you're turned away because they're closed it down for all but emergency treatment .. that's when people flip from their version of what's real to what's actually real.

What's scary is that, as the reality of this crisis becomes more concrete - meaning, it has more supporting details - at least one narrative of it is driven further and further away from what's actually happening. (I think these two things exist in relation to one another). There are people who still think it's a hoax (that it doesn't exist).

FWIW: While the primary goal of propaganda is to misinform, the secondary goal is to get you to doubt yourself .. to get you to systematically "deny your own reality". So if you're currently doubting the seriousness of this crisis, to me, that's not a good sign.

Footnotes:
[1] it's not.
[2] this was not true at the time, it was not part of the planning, nor did it ever come to fruition. it was simply made up.
[3] Want to see how "under control" it is? Go to this URL and switch to "Linear Scale" on the top chart.
[4] Trump’s Crazy Coronavirus Math Will Kill as Many as 1.8 Million Americans
[5] A study published this week by Imperial College London predicted that unless aggressive action is taken, the coronavirus could kill 2.2 million Americans in the coming months".
[6] Univ. of Washington researchers predict 80,000 COVID-19 deaths in U.S. by July
[7] Trump's Coronavirus Calendar
[8] Trump touts great success as US becomes world's worst virus epicenter
[9] Severe ventilator shortage sparks desperate scramble
[10] Trump questions need for 30,000 ventilators in New York
&ndsp