The Laramee Filter: pseudorandom thoughts, subsequently put on the Internet.
blog  |  index  |  music  |  hiking and trail running galleries  |  contact
Author:
Tom Laramee
Next: A Quick Introduction to ...
Date Published:
December 31st, 2021
Previous: My Unorthodox Hike to the ...
Word Count:
2,226 (15:00 read time)
Filed Under:
Crypto
NOTE: Check out this article, published on 01/21/2022, after my post. It does an excellent dive into the mechanics of why the only way to try to make money in crypto is to time the market.
NOTE: And here's a quote (source: Jeremy Grantham) from an article published on 01/21/2022:


11. "Cryptocurrencies leave me increasingly feeling like the boy watching the naked emperor passing in procession. So many significant people and institutions are admiring his incredible coat, which is so technically complicated and superior that normal people simply can't comprehend it and must take it on trust. I would not."

My Entry Into (and Exit From) the Cryptocurrency Market

I began to become interested enough in crypto this past year to make an investment sufficiently large to force me to both learn about cryptocurrency mechanics and to pay attention to the overall dynamics of the market.

I didn't try to time the market, I just bought into a half-dozen coins over the course of several months, and I tried to diversify my portfolio (if such a thing was even possible) by reading about the design goals and/or intent behind each coin and then choosing coins that sounded as different from one another as possible.

The factors I tried to diversify were around privacy, lending and borrowing capability, ease of use, integration with external/existing financial systems and APIs, etc. While the whitepapers for these coins are incredibly fascinating, I usually only perused the "High-Level Overview" section to get an idea of the intent of any given crypto.

It's worth taking a quick look at one of the whitepapers: Zcash whitepaper (I dare you). Scroll down to page 100 and let me know how that goes. You'll see section titles such as:

Here are a couple of screen captures from the Zcash whitepaper, for those who are short on time (and/or unfamiliar with the libsnark library and zk-SNARK Parameters): 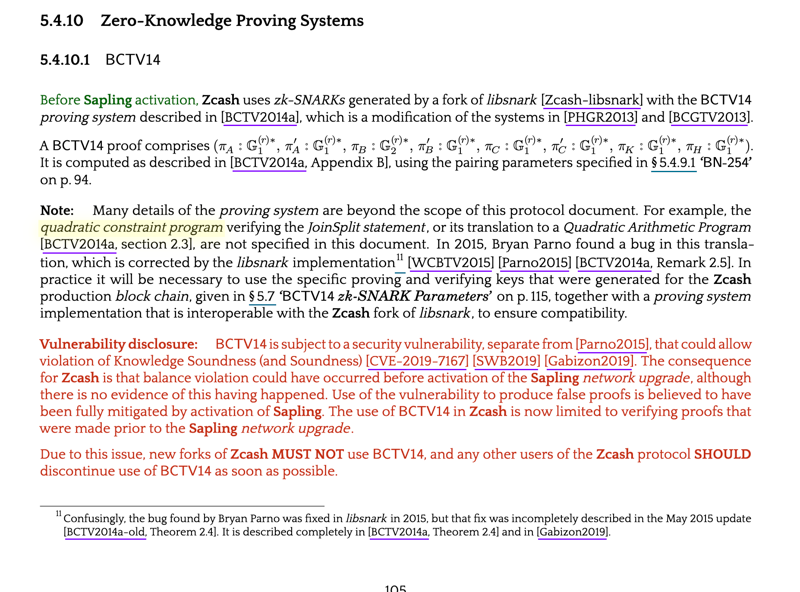 Some Light Reading Before Bedtime: Note the Vulnerability Callout

Excerpt #2 from the Zcash whitepaper. Let's grab a coffee soon and make sure we both understand what they're trying to say here: 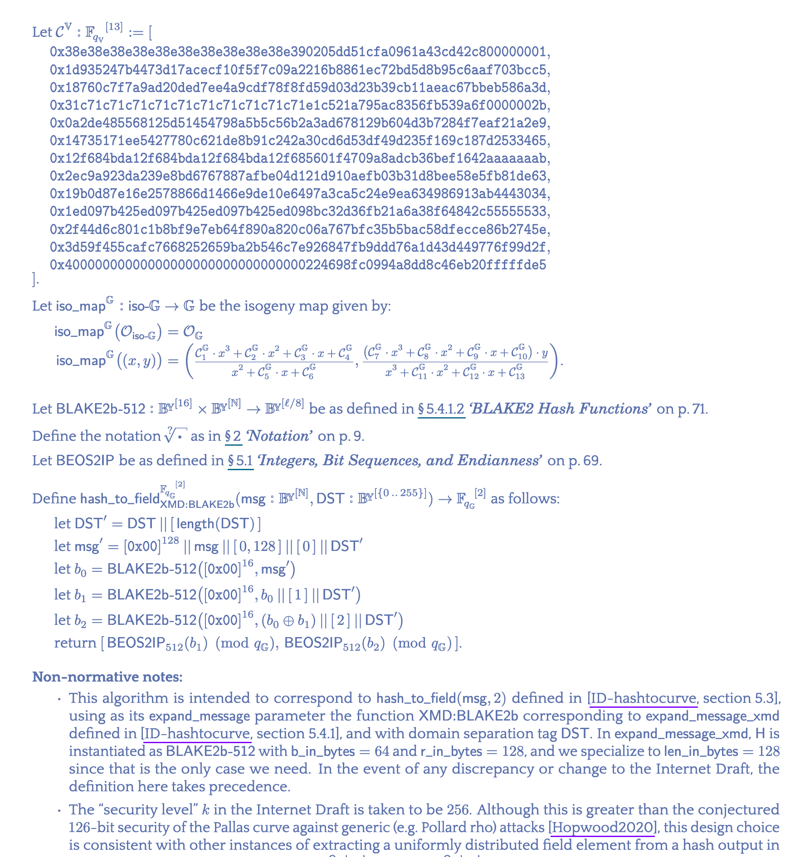 I've spoken with many people about crypto (from multiple generations) and I've observed three main groups of thinking, and these appear to me to be a sort of evolution of thinking. There are three main phases in the evolution:

I'm currently in phase 3, but would like to offer up some of my thinking as I worked my way through phases 1 and 2.

Phase 1: This Is Nonsense.

It's easy to dismiss crypto as nonsense. The idea that it's not asset-backed, nor is it regulated, nor is it a currency you can physically hold/touch: these are the more pragmatic reasons people dismiss crypto. It also has a decently high barrier to entry, and the jaw-dropping volatility of a coin like Bitcoin suggests an incredibly high risk.

That said, as I begin to learn about the underlying mechanics and technology of cryptocurrency, I didn't find myself getting more confidence ... in fact, my confidence went down.

In fairness, there's a lot to understand w/r/t crypto just to get to the starting line. Based on what I've read during my research, most users hold their crypto in the most precarious arrangement (e.g.: users of coinbase allow coinbase to hold their private keys, as opposed to moving these to a digital wallet, which implies that if coinbase is hacked, those users will lose their holdings). This suggests to me that most crypto investors are willing to do the minimum amount of work to understand how to buy and sell crypto, but don't bother with the gritty details.

Also in fairness, just moving your holdings to a digital wallet is complicated, and seems fraught with peril, and if you screw it up (e.g: by forgetting to write down your passphrase, or losing your passphrase due to a hardware failure of your disk drive), you could lose your entire holdings.

I suspect that most people summarily dismiss crypto prior to learning about the underlying mechanics, but the details of who holds the keys, where they're stored, how digital wallets work, how bitcoin is mined (and it's incredibly detrimental environmental impact), how many Bitcoin are "stranded" (because the purchaser lost their keys), how many coins have been hacked, the novelty of the blockchain, the ridiculous fees that exchanges like Coinbase charge to buy and sell crypto: any of this is sufficient to dismiss crypto as hopelessly risky.

There is something to be said for the idea that human beings arbitrarily designate value, thereby creating "wealth" from nothing. In other words, I understand that a commodity can have all of it's value imputed upon it simply by people declaring "this has value" (vs. actually having value from it's own side).

So this concept is easy for me to understand.

Such is the case with cryptocurrency. I believe there is value in some coins, as we've all decided there is. The problem being, if value is arbitrary, then value can be taken away as quickly as it was granted.

One metaphor I employed to convince myself that crypto might be a good investment was to compare it to Pokemon cards. These innocuous cards originally cost around $1 each but have become incredibly valuable over time, with the top-most expensive card selling for more than $350k[1].

One might reasonably think: "If I buy enough of these cards, surely at least one will be worth something some day".

The problem being, that metaphor is only the beginning. You would need to extend it to something more like: "Consider if there were thousands of different sets of Pokemon cards, instead of only one set" (and if this was the case, how would that affect the value of each individual card in each individual set, and it's chances of being worth significantly more some day).

Not only that, you'd likely have to go even further, to something much more complete: "There are now thousands of different sets of Pokemon cards, and anyone can create a new set, and should you purchase some, you have no idea if you'll even be able to receive your cards, and if you do you may find out you're locked out from being able to sell them when the price is in free-fall, or possibly that the cards never existed in the first place".

A good example might be the collapse of the Squid Game crypto currency, in which the price dropped suddenly to zero when the developers of the site went dark[2][3].

When I read say, /r/cryptocurrencies, I read an awful lot of magical thinking (e.g.: when crypto will completely replace fiat currencies for good, pump and dump for specific coins, etc). And as with seemingly all investment forums, people "count the hits" [when they make money] and "ignore the misses" [when they lose money].

An odd argument I've heard several times before is the following: "There's an upper limit to how many Bitcoin can exist, which inherently protects the value of each individual Bitcoin".

This argument is nonsense. While it's true that only 21M Bitcoin can ever be minted, each coin can be bought in fractions down to 0.00000001, which if my math is right, that's 100B portions per coin. So multiply that 21M by 100B to get the total number of possible fractional Bitcoin.

There Problems With Crypto as a Serious Investment

I've concluded that there are several problems with crypto that make it an incredibly unwise investment.

(a) It's impossible to diversify your portfolio. The coins list various areas in which they excel and/or target (e.g.: "privacy", "decentralized", and "allows users to open collateral-backed loans"), but in the end, there are thousands of coins, most of them Ethereum based, whose overall differences are trivial. Said another way: it's not like you can diversify your crypto portfolio with a traditional version of real estate, commodities, an Index 500, and some bonds. The crypto market, overall, has a correlation of 1, meaning all coins generally rise and fall in sync with one another (and the correlation is to the price of Bitcoin).

(b) The main way that people make money in crypto is via market timing. The crypto landscape is littered with pump and dump schemes. In one such scheme, there was a clear whitelist of people who could sell as the price collapsed while most users were locked out... all one had to do was read the crypto's whitepaper to see the list (and to see how unfair it was). In classic investing, market timing is a no-no, in that it generally can't be done. So why do people think they can time the crypto market? (hint: they can't).

(c) The infosec side of crypto is a disaster. Consider that the root password holder of $192M worth of crypto died and the root password has never been found, which means that the holders of the $192M of crypto are perpetually suspended from accessing their coins[4]. Or consider that $120M was stolen via a script injection hack[5]. Or consider that an exploit was found in a protocol that helps join blockchains together and $600M was stolen[6]. Since there's no transparency (and therefore no insight into how software is managed, nor necessarily any encryption of basic information like passwords and keys), there's an incredibly high risk that even the big players like coinbase will eventually get hit.

There are countless examples of infosec problems and crypto[7][8]. It's pretty scary stuff and continually reminds me that crypto is still in it's "wild west" phase.

And if you're looking to NFTs instead, well, you're going to get burned. I predict the NFT market will become a massive pump and dump (it is already, with headlines like "BEST NFTS To Buy Now? - NFTS To Invest In NOW"), and the vast majority of holders of NFTs will be left holding the [empty] bag[8]. And something to keep in mind: you may think you're actually the only person who "owns" and NFT when you buy one, but this is not true. The pointer to the actual digital artifact is able to be scraped from the blockchain. Someone did just that[9].

I cashed out most of my crypto holdings already. The reason was mostly due to a "lost opportunity" cost, meaning: the longer I held crypto and watched the price thrash around between extreme highs and extreme lows, the more I missed out on investing in something with an actual return (and I was unwilling to put in the time to attempt to time the market).

Overall, I was break-even in the end, but this was over the better part of a year, and so if I compare this investment to say, a similar investment in the Vanguard Index 500 fund (which had a one-year return of 27.25% for 2021), then it was a bad call.

If I had to offer up any advice, it would be: only invest in crypto that which you can afford to lose entirely (as you just might).

Footnotes:
[1] Thirteen rare Pokemon cards that are worth ridiculous money
[2] Squid Game Cryptocurrency Collapses, Developers Scam Investors of $2.1 Million USD
[3] Squid Game meme coin crashes by 99.9% after developers pull the plug
[4] Crypto exchange founder dies, taking the password (and $190M) with him
[5] Someone stole $120 million in crypto by hacking a DeFi website
[6] Hackers return nearly half of the $600 million they stole in one of the biggest crypto heists
[7] Over $7.7 billion stolen in crypto scams in 2021 and 4 other updates you should know
[8] A crypto crash wiped out $1 trillion this week. Here's what happened
[9] Small Group of Insiders Is Reaping Most of the Gains on NFTs, Study Shows
[10] Right Clicking All The NFTs
&ndsp